Dead bodies that have been abandoned in Federal Medical Centre, Asaba are reportedly set for mass burial. 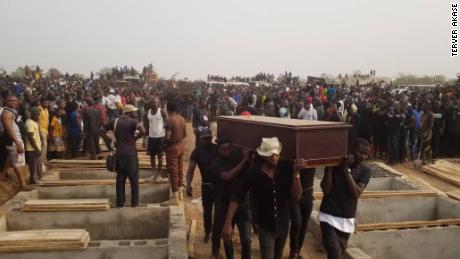 File photo
Disturbed by the indiscriminate dumping of bodies at the Federal Medical Centre (FMC), Asaba morgue by the Oshimili local government council, management of the morgue is set to embark on the mass burial of over 50 bodies dumped at the hospital, TheGuardian reports.
Hospital top sources confirmed that the decision was prompted by the hospital’s resolve to decongest the 100-capacity morgue and to also pave way for internal depositors, after the hospital summoned representatives of the local council to a meeting following the breakdown in the cordial relationship that existed between the two bodies.
The Chief Medical Director (CMD) of the hospital, Dr. Victor Osaituma, said several letters by the hospital management to the council to address the issue were ignored for inexplicable reasons, saying, “we are neighbours, we are friends and we shall remain friends even though they have being unfair to us at the hospital.”
The option of a mass burial according to hospital sources was considered after all efforts to dialogue with the local government authority on the way forward failed.
The Guardian was further informed that the management of the hospital is said to be disturbed by the long silence of the local government authority on the issue inspite of all the approaches made by the hospital.
Efforts to get the chairman of the local government area, Mr. Uche Osadebe, for his response met a brick wall yesterday.It would be recalled that the University of Nigeria Teaching Hospital (UNTH) had recently expressed its decision to dispose 450 bodies abandoned in the hospital since 2010. Chief Medical Director, Dr. Christopher Amah, who spoke to newsmen, said most of the bodies were dumped by operatives of the Enugu State police command, while a few of them were those that died in the hospital but because of some unknown reasons, their relations did not ask for the bodies.
Amah called on those who have relations among the dead persons to come and collect the bodies free of charge. He said: “These bodies have been in the hospital since 2010, occupying the space. Most of them are suspected robbers that police shot dead and later dumped in the hospital.
Top Stories