The heartbreaking story has been told of a 6-month-old Nigerian baby who needs N5 million for heart surgery. 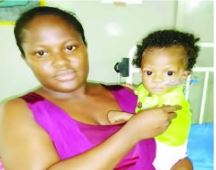 Abiodun and Foyinsoromi
According to a report by Punch Metro, a Consultant Paediatric Surgeon at the Lagos State University Teaching Hospital, Dr O. M. Faboya, has said that six-month-old Foyinsoromi Shodimu will require surgery to correct her congenital heart condition.
Faboya wrote in Foyinsoromi’s medical report that the congenital heart disease was discovered through an echocardiogram, a test that allows doctors to examine the condition of the heart, adding that she had been placed on anti-failure regimen-syrup.
The medical report read in part, “Foyinsoromi was seen in the outpatient clinic on February 5, 2019, with complaints of recurrent constipation since birth and failure to thrive. Examination revealed a small-for-age infant with abdominal distension. She was admitted and rectal irrigation was commenced,  but had little improvement.
“A colostomy, which is an opening surgically created in the abdomen to function as an anus, was done, but she developed persistent tachypnoea, abnormal rapid breathing post operatively.
“A chest x-ray revealed opacity across the right upper and middle lung zone diagonally with a poorly defined shape. A chest CT scan done to further evaluate this showed findings suggestive of a right lung sequestration involving the middle lobe, but both findings were not thought to be indications for surgery at the point.
“Echocardiogram done showed moderate sized secundum Atrial septal defect (L-R), moderate sized perimembranous VSD (L-R), moderate sized PDA (L-R) with severe PAH. She has been placed on anti-failure regimen-syrup captopril 0.235mg b.d and syrup Frusemide 2.5mg b.d. She now requires surgical treatment for the congenital heart disease. Pull through operation for the Hirschsprung’s disease – a condition that affects the large intestine and causes problems with the passage of stool – will be done at a later date.”
The patient’s mother, Abiodun, while lamenting that she had in the past lost two children, said Foyinsoromi, who is her second surviving child, had become bedridden due to her heart condition.
She stated that a total of N5m would be required for the surgical procedure abroad, adding that a hospital in India had been contacted.
Abiodun stated, “I gave birth to four children, but Foyinsoromi and her elder brother are the only ones alive. When I gave birth to her, I noticed that she was breathing heavily and was also vomiting whenever I breast-fed her.
“So, we took her to the Ijebu-Ode General Hospital, where she was placed on admission for two weeks till things got better. But when we returned home, I realised that she was not passing out excreta and her stomach was getting bloated; I took her back to hospital and was told to run some tests, through which it was discovered that she needed surgery at the LASUTH.
“After the surgery, her stomach came down and I thought the worst was over, only to discover that she was still breathing heavily. I had thought that the issue was because she could not pass out excreta. I was advised to do an echo test, which revealed that she had three holes in her heart.
“It was when I took the result to the cardiologist that I was told that she would need about N5m for surgery in India. I don’t know how and where to raise that kind of money and that is why I am begging the government and Nigerians to assist me in raising the fund.
“She has gone through a lot for her age and real progress has not been made. As I speak to you, she excretes through colostomy and for that to be reversed, the doctors are saying that her heart condition has to be corrected first. She has been on oxygen for over three weeks and has not been growing properly because of her heart condition.
“We had spent a lot on her up till the time she was bedridden. Currently, we pay N2,500 daily for oxygen and N5,400 for drugs every day. We have been thinking all through because the expenses keep increasing and I don’t want to lose her because I have already lost two other children.”
Foyinsoromi’s father, Adebayo, said the baby had been in and out of hospital ever since she was born, adding that he had exhausted all his savings on her treatment.
Top Stories