Nigerian senate president, Bukola Saraki has revealed what was his saddest was as the leader of the senate. 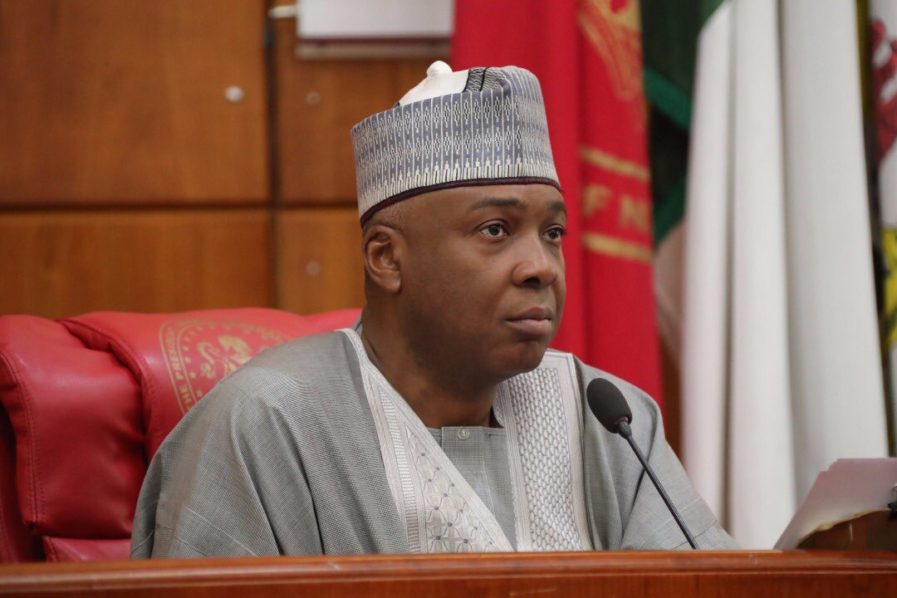 Bukola Saraki
Nigeria’s Senate president, Bukola Saraki, has said that April 18, 2018, was the saddest day of his tenure, Premium Times reports.
Mr Saraki said this Thursday while delivering his valedictory speech. The valedictory session marks the last sitting of the eighth Senate.
After other senators had taken turns to reflect on the eighth Senate, it was the turn of Mr Saraki to deliver the last speech.
Before reading his speech, Mr Saraki asked his colleagues to observe a minute silence in honour of late Senators Ali Wakili (Bauchi South), Isiaka Adeleke (Osun West) and Bukar Mustapha (Katsina North) who passed away in the course of the eight Senate.
Mr Saraki thanked his colleagues for their support even in the face of trials.
He noted that the Senate invasion, which led to the theft of the mace, would remain ‘saddest’ moment for him.
“Distinguished colleagues, let me thank each and every one of you for your contributions towards making this the historic Senate that it is. When I think of the many trials and tribulations we have faced as an institution, and my own personal travails, particularly at the Code of Conduct Tribunal, I am humbled, because none of our achievements would have been possible without the support and cooperation of the entire members of this chamber.
“The invasion of the National Assembly by armed security operatives in August 2018 will live in infamy. This way down the line, however, I realise that the day of that invasion was the saddest – but in many ways, it was also a good day for asserting the independence of the legislature and the triumph of democracy.
“It also turned out to be a showcase of the special relationship between this chamber and the House, as Honourable Members stood in unison with their Senate colleagues in defiance of the invaders. I thank the House of Representatives for the remarkable unity of the two chambers of the 8th National Assembly, for it was only in unity that we could withstand the storm.”
Mr Saraki boasted of the conduct of his colleagues who he said had no scandal in the last four years.
“In closing, distinguished colleagues, let me say that I am quite proud of the fact that there was not a whiff of scandal in this Senate. You carried yourselves with the bearing and sense of probity worthy of the office. You played your part in strengthening Nigeria’s democracy. May the work we have done here bear bountiful fruits in the length and breadth of this great country of ours, and may it be so for years to come.”
As part of its achievements, Mr Saraki mentioned the Senate’s effort on National Assembly Joint Public Hearing on the Budget, Senate’s roundtable, intervention in the North East, intervention in the two-year strike of the Ladoke Akintola University of Technology (LAUTECH), engagement with the executive among others.
Other achievements, he said, include making public the National Assembly budget and setting aside of one per cent of the Consolidated Revenue Fund (CRF) for the Basic Health Care Provision Fund.
“Just the other week, the Minister of Health called the 1 per cent CRF a ‘game changer’, no doubt because, by our activities in this chamber, we are touching the lives of Nigerians and even those unborn.
“Speaking of commendations, our interventions on health also won plaudits from international philanthropists Bill Gates and Bono, as well as the Director-General of the World Health Organisation (WHO). Similarly, our amendment of the Universal Basic Education Act, guaranteeing free education for children aged nine to twelve, won praise from education rights activist and Nobel Laureate, Malala Yousafzai.
“We cracked the code of several Bills that had eluded Senates before us. We broke the decade-old Petroleum Industry Bill (PIB) into a quartet of workable bills including the Petroleum Industry Governance Bill (PIGB), whose passage stands as a major achievement of the eighth Senate. The Companies and Allied Matters Act (CAMA) was the most comprehensive reform law governing Nigeria’s business environment in nearly 30 years. The Nigeria Financial Intelligence Unit (NFIU) Bill was one of the major anti-corruption laws we passed, and it saved the country from being expelled from the global body of the Egmont Group. And as recently as May 22, we passed the Nigerian Football Federation Bill which had been caught in the legislative bottleneck for 15 years,” he said.
Mr Saraki advised his successor to continue in that line.
On the other hand, the Senate president urged a more cordial relationship between the executive and legislature.
“And as we say all the things we have done, we must also be reflective and candid enough to acknowledge the things we didn’t do. It is my hope that the ninth Senate will improve on our performance and deliver on those areas that we were not quite able to touch.
“It is also important that I make some comments about Legislature-Executive Relations. My own take is that if the Executive sees the National Assembly’s work on the budget as interference despite the provision of the constitution, then there will continue to be problems between both arms of government.

“If the presidency refuses to have engagements and consultations with the leadership of the National Assembly before the president submits the budget to the legislature, then there will continue to be frictions.”
Top Stories