As many as seven members of the Indigenous People of Biafra have found themselves in serious trouble after scaling a fence in Asaba. 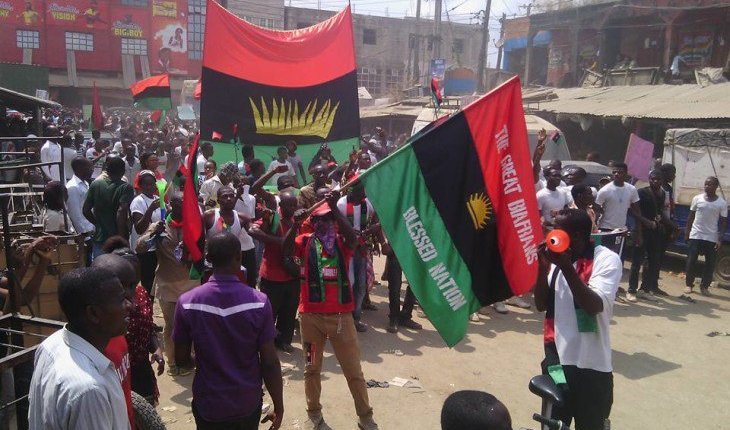 File photo: IPOB members
The police in Asaba, on Friday, arraigned seven members of the Indigenous People of Biafra (IPOB) in Magistrates’ Court for allegedly disturbing the peace in a brothel, NAN reports.
The police charged Chinenye Ndunu, 25; Chidi Agbuma, 29;  Uche Obra, 29; Sopuru Enenyo, 22; Anayo Andrew, 25 ; Williams Ikpati 19 and Ezechukwu Ekemezie, 40 with belonging to secret society and breach of peace.
The Prosecution Counsel, Mr. Rapheal Eze, told the court that the defendants committee the offence on May 27 at Tipper Junction, Asaba.
Eze alleged that the defendants who introduced themselves as members of the IPOB, scaled the fence of Best lodge Brothel, and caused tension in the neighbourhood.
He said that the offence was punishable under sections 516(a), 64 and Section 249(d) of the Criminal Law of Delta State, 2006.
The Magistrate, Mrs. Edith Anumodu, admitted the defendants to bail in the sum of N50,000 each with two sureties in like sum.
Anumodu ordered that the sureties should reside within the court’s jurisdiction, who must be relatives of the defendants.
She adjourned the case until June 14.
Top Stories