More condemnation has trailed the suspension of the operating licence of African Independent Television and RayPower FM by the NBC. 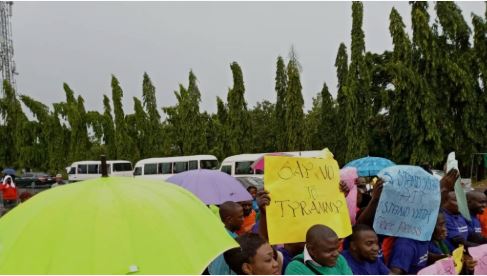 Staff of Daar Communications during a protest in Abuja on Thursday. Source: Twitter
Opposition political parties on the platform of the Coalition of United Political Parties on Friday condemned the suspension of the operating licence of African Independent Television and RayPower FM by the National Broadcast Commission.
CUPP, therefore, called on all opposition state governors, lawmakers, members of allied parties, supporters and all Nigerians sympathetic to the cause of Chief MKO Abiola, freedom of speech and the Nigerian opposition to boycott the events marking the June 12 Democracy Day celebrations, if the decision was not reversed.
The coalition’s position was contained in a statement made available to journalists in Abuja by its national spokesman, Imo Ugochinyere.
The CUPP said a nation that suppresses free speech and unlawfully shuts down media houses cannot invite people to an event to mark the same democracy it is trying to destroy.
“The celebration is at best a mockery of democracy and the memory of Chief MKO Abiola, the acclaimed winner of the June 12, 1993 elections, who himself was a media mogul and also suffered so much in the hands of the maximum dictator Sani Abacha whom President Muhammadu Buhari served, adored and defended till date and whom he still emulates till this day.
“The CUPP also enjoins all media houses in the country to do whatever is lawful and they consider necessary to do in defence of free speech and protection of constitutional and democratic rights,” the statement read.
The coalition also described the closure of the media house as a complete reversal of the democratic gains the country has made in the last two decades.
Describing the reasons given by the NBC as flimsy excuses, the CUPP said the reasons adduced cannot survive the simplest of tests in a constitutional and democratic society.
“This act of shutting down Nigeria’s premier private television and radio stations is as despotic, totalitarian and authoritarian as it is primitive, barbaric and a complete reversal of the democratic gains the country has made in the last two decades,” it said.
Top Stories