A fun seeker has been shot dead by a police officers in a Kwara community, causing serious commotion in the are. 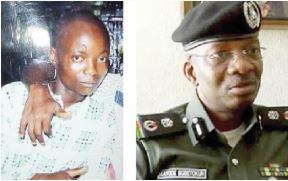 Issa, Egbetokun
Eid-el-fitri celebration turned sour on Bello Babatunde Street, Egbejila Road, Ilorin, Kwara State, on Wednesday as a 25-year-old fun seeker, Wasiu Issa, was allegedly shot dead by a policeman at a hotel in the community, Punch Metro reports.
It was learnt that the owner of the hotel – Solid Worth Hotel – had invited a Fuji musician from Lagos to perform at the facility that day to mark Eid-el-fitri celebration.
City Round gathered that some weeks to the event, the hotelier had sold cloths (aso ebi) and caps to members of the public. The dress was to serve as the pass to gain entry into party hall.
It was learnt that on the D-Day, policemen from D Division, Adewole and Special Anti-Robbery Squad of the state police command were deployed in the hotel for security.
The party reportedly started around 6pm and was supposed to end at dawn.
Around 9pm, Issa was said to have approached a soldier, who was at the entrance of the hotel with some policemen, and begged to be allowed access into the party hall.
As Issa, who was not wearing the required attire, was trying to appeal to the soldier, it was learnt that some people also struggled to gain entry.
A policeman then reportedly shot into the air to disperse the crowd and a bullet hit Issa, a mechanic, in the back.
A resident of the area, who gave his name only as Soji, said that Issa died shortly afterwards.
He said the party was brought to an abrupt end as angry youths vandalised the hotel.
He stated, “A Fuji musician from Lagos, Remi Aluko, was playing at the hotel that day. Wasiu (Issa) bought the ‘aso ebi’, but his tailor disappointed him. He begged a soldier at the gate to allow him to enter. Some people were also at the gate trying to enter the hotel.
“As people were struggling at the gate, one of the policemen fired gunshots to scare them away. In the process, a bullet hit Wasiu (Issa) in the back. He was abandoned on the floor for about 30 minutes before the policemen rushed him to the hospital. He died from the gunshot injury.”
A fun seeker, who attended the party, Kola Gbadebo, said hours before the incident occurred, the policemen had embarked on a drinking spree, adding that it was possible that the policeman who fired the gunshots was drunk.
He said the police had changed the narrative to a cult clash in order to exonerate the operatives.
He said, “When I arrived at the venue around 7pm, I saw the policemen drinking outside the hotel. Probably, the policemen were drunk at the time the incident happened. The soldier that the man (Issa) approached was angry and he blamed the policeman for firing gunshots.
“The policemen acted unprofessionally. Two residents were arrested in order to cover up the atrocity committed by the official. The police claimed that some cult members invaded the area and shot the man. They are not ready to admit their official was responsible for the killing.”
A relative of the deceased, who spoke on condition of anonymity, alleged that the police twisted the case because the family was poor and helpless.
He said the deceased’s mother was a petty trader and that his father was dead, while urging the state Commissioner of Police, Kayode Egbetokun, and the Inspector-General of Police, Mohammed Adamu, to wade into the matter.
He said, “It is so sad that the police will want to cover up this case just because the family is poor and does not have connections. Issa’s mother is a petty trader, who lives from hand to mouth. It was not a cult clash as the police are claiming and Issa was not a cult member.
“This morning (Friday), the police arrested the elder brother of the deceased, Yakubu, for protesting against the killing by posting the picture of the owner of the hotel together with Issa’s picture on Facebook.
“We want justice. The policeman that killed Issa should be fished out. The policemen at the venue came from SARS and D Division in Adewole.”
It was learnt that Issa was buried on Friday according to Islamic rites.
The Kwara State Police Public Relations Officer, DSP Ajayi Okasanmi, confirmed the murder but he absolved the police of any wrongdoing. He said Issa was killed in the crossfire between two rival cult groups that invaded the venue.
Okasanmi, however, said the police had commenced investigation.
He said, “There was a party at Solid Worth Hotel. During party, there was a fracas between two cult groups at the gate, according to the information we have, which we are still investigating. We were told that one person was shot in the crossfire between the two cult groups. They were trying to gain entrance into the hotel premises.
“Policemen were invited and they dispersed the hoodlums to ensure there was tranquility. The talk about the police shooting somebody is not true. Meanwhile, the police are investigating the matter. We have arrested some people and investigation is ongoing. It is not right to conclude that it was a policeman that shot him. There is evidence to show that the gunshot was not from the police rifle.”
When Punch Metro asked the PPRO to state the evidence, he said investigation was ongoing.
The hotel manager, Musbau Bello, in a short interview with City Round, said the hotel had no hand in the murder.
He said, “What happened did not concern the hotel. It was two cult groups that clashed and an opponent was shot dead.”
He promised to call our correspondent back, but he had yet to do so as of press time.
Top Stories