A rather weird creature which looks like one of the characters from Harry Porter has been spotted in a woman's driveway. 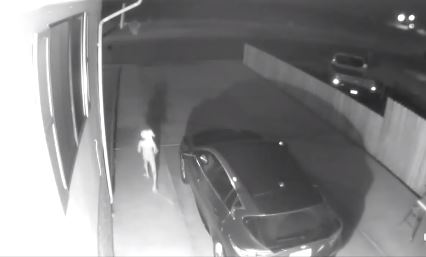 Vivian Gomez of Colorado Springs, Colorado, may never find out what was dancing in her driveway earlier this month.
Gomez posted surveillance footage of the mysterious creature to Facebook on June 6, asking if anyone else had seen the elf-like figure. In the 10-second video, a small being is seen is stomping through Gomez’s driveway before stopping to do what looks like a chicken dance.
“So I woke up Sunday morning and saw this on my camera and am trying to figure out…what the heck??” she wrote alongside the video.
“First I saw the shadow walking from my front door then I saw this thing….has anyone else seen this on their cameras?? The other two cameras didn’t pick it up for some reason.”
She assured social media users that the footage wasn’t altered in any way, she told one person in the post’s comment section, “I’ve watched it over and over and keep lights on inside now.”
Gomez told Inside Edition that she has a playful 9-year-old, Bobby, but she’d never let him out so late at night in the dark by himself. Gomez said she thinks whoever — or whatever — it was, it ran across the street into a nearby field.
Internet users were as intrigued by the footage as Gomez. The video has been viewed 12 million times on Facebook and shared more than 158,000 times.
“Dobby came to make sure you are safe!!” one person wrote in the comment section, referring to the beloved elf in the Harry Potter series. Others simply commented with gifs of the character, and one declared, “Looks like [Dobby] from Harry Potter!”
The footage has caused a lot of buzz in the local community.
“Is that an alien?” Gomez’s neighbor, Kelsey Eddy, told Inside Edition. “I’ve never seen something like that before in my life.”
As for Gomez, she said she doesn’t know whether she — or the public — will ever get an answer.
“I don’t know if it ever will be solved,” she told the site.
***
People
Top Stories