EFCC Smokes Out 7 Internet Fraudsters From Their Abuja Hideout


The suspects, who were arrested on June 11, 2019, had in their possession a Toyota Camry 2018 and a Toyota Corolla, as well as mobile phones. 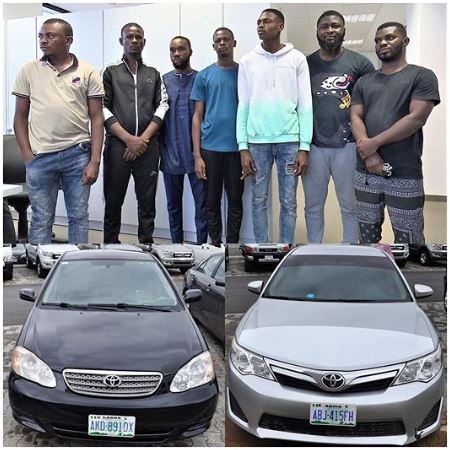 The suspects
Operatives of the Abuja Head Office of EFCC have apprehended seven internet fraudsters at the Sunshine Estate, Gwarinpa.
They are: Asuquo Happiness, Agboje Lucky, Emmanuel Ochuko Okume, Lucky Ijire, Karo Ijire, Chinaka Chijoke Promise and Ibrahim Adiat.
The suspects, who were arrested on June 11, 2019, had in their possession a Toyota Camry 2018 and a Toyota Corolla, as well as mobile phones.
Investigations into their nefarious activities, which spanned months, revealed that they specialized in stealing people’s identities on social media, particularly FaceBook and Instagram.
They then use the stolen identities to create fake profiles, using same to establish fraudulent relationships, with the aim of defrauding their victims.
Some of the aliases used to perpetrate online fraud, include, James Bord, Tom Clanson, Paul Hanson, Clinton Maher, Richard Jordan and David Morgan.
One of them uses phishing as his modus operandi where he sends out bulk messages and malware with viruses, which when the target clicks on the message, they are able to gain access into their victim’s information.
Another claims he goes to the “dark web” to buy hacked logins to look for any business transaction and double cross the transaction using another account.
One of the suspects confessed to creating over 20 social media accounts. They further confessed to having at various times made $5,479, $4,900, $1,500, $2,500, $7,000, $27,000, which were received through Western Union, Bitcoin, exchangers, and through Nigerians based outside the country, who have offshore accounts.
Top Stories