The Supreme Court is set to deliver judgment on the Osun state governorship elections on the 5th of July. 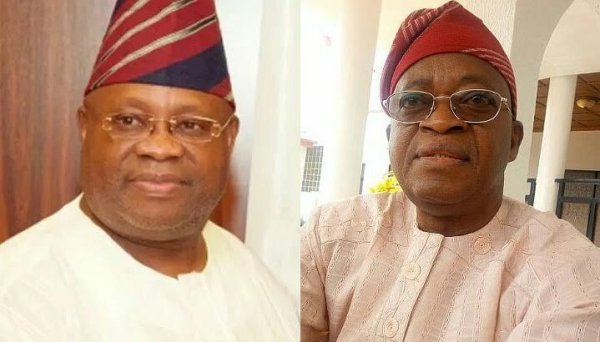 Adeleke and Oyetola
According to a report by Punch Metro, the Supreme Court on Monday fixed July 5 to deliver its judgment on the dispute arising from the September 2018 governorship election in Osun State.
The Peoples Democratic Party and its candidate in the said election, Ademola Adeleke, had filed four separate appeals before the apex court to challenge the Abuja Division Court of Appeal’s decision affirming the All Progressives Congress and its Governor Adegboyega Oyetola as the winner of the poll.
A seven-man panel of the apex court led by the Acting Chief Justice of Nigeria, Justice Tanko Muhammad, has already heard one of the appeals on Monday.
The decision in the particular appeal filed by Adeleke is to be binding on two other appeals, while the fourth appeal will be heard and a judgment delivered on it separately.
The seven man-panel rose after hearing the first appeal on Monday.
The panel is to return shortly to conclude the hearing on the remaining appeals.
Other members of the panel led by Justice  Muhammad are Justices Kumai Akaahs, Kudirat Kekere-Ekun, Amiru Sanusi, Paul Galinje and Uwani Abba-Aji.
At the proceedings, the appellants’ lawyer, Dr. Onyechi Ikpeazu (SAN), urged the apex court to uphold his clients’ appeal, upturn the judgment of the Court of Appeal and affirm that of the Osun State Governorship Election Petition Tribunal which had upturned Oyetola’s election and declared Adeleke as the true winner of the poll.
But Oyetola’s lawyer, Chief Wole Olanipekun (SAN), urged the court to dismiss the appeal and affirm the judgment of the Court of Appeal.
Counsel for the Independent National Electoral Commission, Mr. Yusuf Ali (SAN), and that for the APC, Olumide Olujinmi, also urged the apex court to dismiss the appeal.
The appellants are by their appeal challenging the May 9, 2019 majority judgment of the Abuja Division of the Court of Appeal which affirmed Oyetola’s victory at the September 2018 poll.
Dissatisfied with INEC’s declaration of Oyetola as the winner of the September 2018 governorship election, Adeleke and the PDP had filed a petition praying for an order nullifying the election and declaring them as the winner.
By a split decision of two-to-one, the three-man tribunal had in its verdict delivered on March 22, 2019 nullified the election of Oyetola and his party and declared Adeleke and his PDP as the duly elected.
But, on May 9, 2019, the Court of Appeal, in a four-to-one split decision of its five-man panel led by Justice Jummai Sankey, nullified the majority verdict of the tribunal.
Justice Sankey along with three other members of the panel, Justices Abubakar Yahaya, Isaiah Akeju, and Bitrus Sanga, adopted the majority judgments on the three appeals which went in favour of the APC and its candidate.
But another member of the panel, Justice George Mbaba, dissented from the majority judgments in the three appeals.
Justice Mbaba, went on to dismiss the three appeals filed by Oyetola, the APC and the Independent National Electoral Commission and upheld the majority judgment of the tribunal which declared Adeleke and the PDP as the true winner.
Both PDP and Adeleke appealed to the Supreme Court against the majority decision of the Court of Appeal.
Top Stories