A frustrated Nigerian man in London has reportedly destroyed as many as 5 embassy cars over his failure to get visa services from officials. 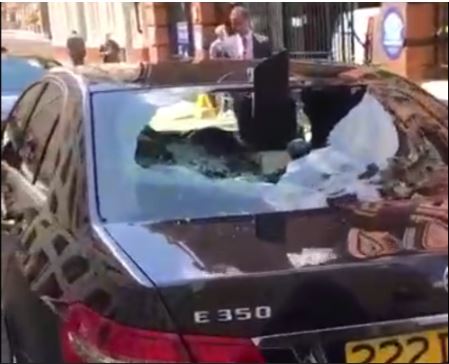 One of the affected cars
According to SaharaReporters, a yet to be identified Nigerian man, frustrated with the visa process at the Nigerian Embassy in London has damaged vehicles belonging to the Nigerian mission in London after he was denied passport services.
A video viral shows the level of damage done to the car as onlookers and embassy staff looked on helpless.
One embassy staff in the video speaking in Hausa could be heard saying, "Mohammed can you see, one mad boy came to collect passport and they didn't give him so he destroyed our cars."
The police can also be seen in the video assessing the level of damage on the vehicles.
Friday Akpan, Ministry of Foreign Affairs Spokesperson, when contacted by SaharaReporters said that he was not aware of the incident and did not have any information on it.