The family has been on the lookout for the woman and has urged anybody with information on her whereabouts to contact the police. 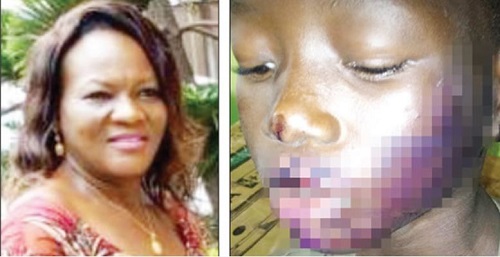 Saude Kuti and the victim

A middle-aged housewife, Saude Kuti, has fled her home after allegedly torturing her 10-year-old stepson, Ezekiel Kuti, with a hot pressing iron.

It was gathered that after spilling the groundnut oil, Ezekiel filled the bottle with water in order to conceal his mistake for fear of being beaten.

The victim said Saude became furious when she came back and discovered the mixture of oil and water.

The 10-year-old told our correspondent that when the pain was too much for him, he fled the home.

He stated, “I wanted to take something in the cupboard when the groundnut oil mistakenly spilled on the floor and I immediately scooped it back into the bottle but when I realised that the oil did not fill the bottle, I added water because I wanted to avoid torture by my stepmother.

“When she came back and discovered the mixture of water and oil, she called me and asked how it happened and she started beating me, but when she discovered that I was not crying, she plugged the iron and pressed it on my face.”

The Basic 4 pupil, who noted that he had been experiencing constant beating by his stepmother before the incident, said she had done a similar thing to one of his siblings in the past by pouring hot water on her.

He added that because there was no evidence against her, the case was dropped.

However, the family has been on the lookout for the woman and has urged anybody with information on her whereabouts to contact the police.

The victim’s father, Babatunde Kuti, who noted that he did not take the matter lightly with the stepmother, said she had been on the run since the incident happened.

He stated, “If I was at home when this incident happened, I would have known what to do. When I came back and my son reported the matter to me, I took action against her.

“I did not take it lightly with her; I quarrelled with her with all my heart to the extent that a friend, who heard my voice when I was chastising her, came to meet me that I should not let it result into another thing. Since that day, I don’t know her whereabouts, because when I noticed that my son was not at home, I told her to go and look for him. As I am speaking with you, her parents have been asking me for her whereabouts.

“I told them what their daughter did but they said before they could chastise her, I should look for her first because the last place she went to was my home town and after leaving the place, I don’t know where she went to. I am a law-abiding citizen; I can’t condone my wife maltreating my children.

“A human rights organisation and a child abuse organisation have stepped in and they said any time I see her, I should get her arrested but as I’m talking to you, her whereabouts are not known to me.”
Top Stories