Nigerian soldiers have attacked and killed a dangerous oil theft kingpin who had terrorized people in Rivers. 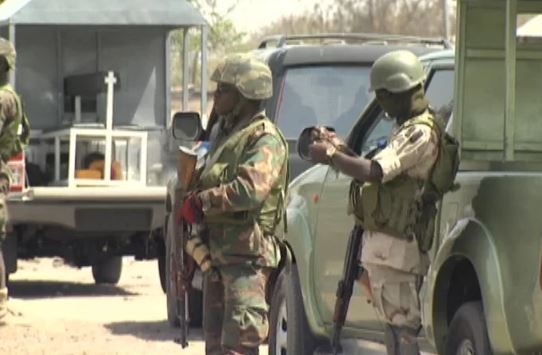 File photo: Nigerian soldiers
The 6 Division of the Nigerian Army in Port Harcourt has confirmed the killing of a notorious cultist and illegal oil bunkering kingpin, Korobo Menele, by its troops, according to a report by Punch Metro.
Menele, who was popularly known as Mene and Oil Minister, was reportedly shot on Sunday, few hours after a group of hoodlums attacked and killed one soldier and two personnel of the Nigeria Security and Civil Defence Corps.
Though it could not be confirmed if Menele was among those who killed the three security personnel, it was gathered that the illegal oil bunkering kingpin was armed when he met his waterloo.
A statement on Monday by the Deputy Director, Army Public Relations, Col. Aminu Iliyasu, stated that three of the four occupants of the vehicle conveying the deceased escaped with gunshot wounds after Menele was gunned down around the Kira junction in the Tai Local Government Area of the state.
The statement said, “In the early hours of Sunday, June 16, 2019, troops of the 29 Battalion of the 6 Division, Nigerian Army, in conjunction with the personnel of the Nigeria Security and Civil Defence Corps guarding the Shell Petroleum Development Company’s Trans National Pipeline in the Gio community, Tai Local Government Area of Rivers State, were attacked by suspected militants, who were prevented from vandalising the Trans Niger Pipeline, thereby putting them out of the illicit business.
“Unfortunately, during the ensuing firefight, one soldier and two personnel of the NSCDC lost their lives and their weapons, one AK-47 and two G3 rifles, were carted away by the assailants.
“Reliable intelligence led to the tracking of the prime suspect, a notorious cultist and illegal oil bunkering kingpin, Korobe Menele Loveday, who has been on the wanted list of the security agencies for terrorising communities in the state.
“Consequently, around 9am, troops took advantage of available information when they sighted a white Toyota Hilux vehicle without number plate being hastily driven with four occupants.
“Efforts by the troops to stop the vehicle at a checkpoint were ignored by the suspects. The gallant troops chased the speeding vehicle and caught up with the suspects around the Kira junction.
“Sensing danger, the occupants opened fire on the troops in a bid to escape. The troops responded and incapacitated the militants’ vehicle. As a result, the bandits abandoned their vehicle and fled into the bush.
“However, one of the criminals was gunned down and was identified as the wanted notorious cultists and illegal oil bunkering kingpin Korobe Menele, popularly known as Mene. Others with him were believed to have escaped with gunshot wounds after leaving trails of blood.”
The 6 Division added that one K2 rifle, two magazines loaded with 52 rounds of 5.56mm ammunition, some personal effects, one pair of vehicle number plate KRK 95DP Rivers, and some documents were recovered from the vehicle.
The statement indicated that the body of the victim and the recovered exhibits were handed over to the NSCDC, Rivers State Command, for further action, adding that the troops had since begun a manhunt for the fleeing bandits.
It pointed out that the General Officer Commanding 6 Division, Maj. Gen. Jamil Sarham, reaffirmed the commitment of the division to protecting the lives and property of law-abiding residents of Rivers State.
Sarham also solicited the cooperation of all stakeholders in tackling insecurity in the Niger Delta region through sharing of credible information with the security agencies.
Top Stories