Yahoo Boys Owe Me For My Incarceration - Naira Marley Insists


Naira Marley regained his freedom amid jubilation barely 14-days after a high court judge granted him bail with a condition of two sureties in like sum. 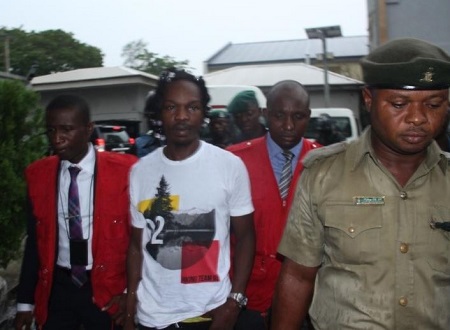 Naira Marley (middle)
Following the release of the popular street rapper, Azeez  Fashola, a.k.a Naira Marley from the Economic and Financial Crimes’ custody, after fulfilling his bail conditions, the eloquent musician has described his brief incarceration as a sacrifice for perpetrators of cyber-crime, popularly known in Nigeria as Yahoo Yahoo.

Recounting his ordeal in the hands of officers of the Economic and Financial Crimes Commission, EFCC, in an Instagram Live video, the ‘Am I a Yahoo Boy’ singer said he was arrested for a crime he didn’t commit, adding that Yahoo boys owe him money. He was quizzed on an 11-count charge bothering on credit card fraud, an offence contrary to Section 27(1) (b) of the cybercrime Prohibition, Prevention Act 2015.

“Those of you that are yahoo boys owe me money. Am I a Yahoo Boy? No, but I have gone to prison because of you”, he stated.

Recall that Naira Marley regained his freedom on Friday, June 14, amid jubilation and barely 14-days after a high court Judge sitting in Lagos, Justice Nicholas Oweibo granted him bail with a condition of two sureties in like sum on May 31.

Meanwhile, reports have indicated that witnesses from financial institutions would testify at his next court appearance slated for October 22, 23 and 24, 2019, respectively.
Top Stories