Drama broke out in court after the wife of a slain civil defence officer began raining curses on the man's suspected killers. 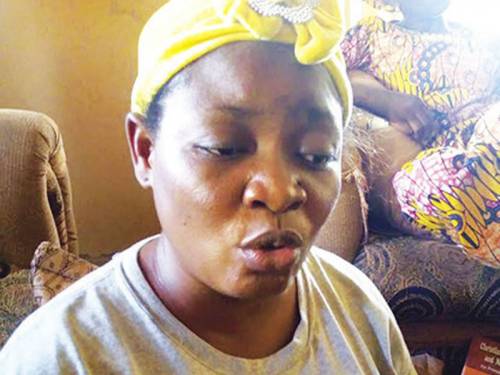 Mrs. Ada Jombo
According to SaharaReporters, there was a drama in a high court at the Federal Capital Territory (FCT) Nyanya, on Tuesday in Abuja as the wife of a slain civil defence officer (Ogar Jombo), Mrs. Ada Jombo, rained curses on the alleged killers of her husband.
The matter which came up before Justice Muawiyah B. Idris was adjourned until September 19, October 7 and 9  for further hearing after the prosecution counsel had asked the court for an adjournment which was granted.
Ada who was also in the court to monitor the proceeding could not control her emotions as she burst into tears and hurled curses on the accused as they are coming out of the court.
"You will die! You will never know peace. Your children will die. You will not go scotfree. Your wife will die even the one that is pregnant when she is giving birth!" she said.
At this point, a sister of one of the accused decided to reply to her and a brawl broke out between families of the accused and the bereaved.
A journalist with TV 360 was assaulted in the melee which lasted for 20 minutes.
Ogar Jombo, an officer of Nigeria Security and Civil Defence Corps ( NSCDC ) was beaten to death in the presence of his wife and children by two police officers for alleged violation of traffic rules at Nyanya in Abuja on March 20.
Top Stories