Falana Reveals The Only APC-Controlled State That Is Fighting Corruption


Falana stated this, on Tuesday, in Kano, while delivering a keynote paper at a two-day stakeholders’ dialogue on corruption in Nigeria. 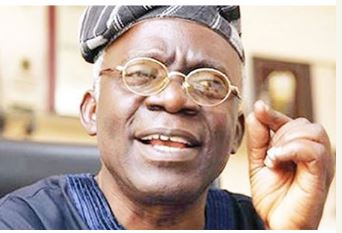 Mr Femi Falana
The human rights activist and lawyer, Mr Femi Falana, has accused the state governments, especially those being controlled by the ruling All Progressives Congress (APC), of insincerity in the fight against corruption in the country.
He said that was why none of them (except Kano State) out of the 20 states being controlled by the party, constituted a formal structure to fight corruption.
Falana stated this, on Tuesday, in Kano, while delivering a keynote paper at a two-day stakeholders’ dialogue on corruption in Nigeria.
The programme, organised by the ActionAid Nigeria, with the theme: “Enhancing Citizens’ Effective Participation in the Fight Against Corruption,” has representatives from the Economic and Financial Crimes Commission (EFCC), Independent Corrupt Practices and other related Offences Commission(ICPC), National Orientation Agency and so forth, as discussants.
According to Falana, only Kano State among all the 20 APC controlled states and indeed in the entire country that has been able to establish Anti- Corruption Commission as an agency to fight corruption at the state level.
“But if we are to fight corruption effectively as a country, the job shouldn’t be only that of the Federal Government, ” he said. “Even at the federal level too, Federal Government has too much control over EFCC and ICPC such that they are selective in their probes.”
Falana however, believes that even at that, what government would need to be more concerned about is wealth creation rather than pursuing corruption here and there.
He also asked Federal Government to give at least N1 billion each from the N606 billion recovered through the whistleblowing policy and other looted funds to every local government council for development purposes.
He said Nigeria real problem started with the introduction of the Structural Adjustment Programme by the regime of General Ibrahim Babangida in 1986 when public assets were sold to wealthy individuals who he said had no interest of the masses at hearts.
He, however, urged citizens to start demanding for their rights as enshrined in the constitution from public office holders rather than folding their hands watching, saying that is the only way to cause real development in the country.
Earlier, the Chairman, Kano State Public Complaint and anti- Corruption Commission, Malam Magaji Rimingado, on a sideline, said, his led agency is only awaiting the police findings on the recent case of Gorila swallowed N6.8 million and that of robbery incident at the state zoological garden.
He said once the police concluded their investigations on a case of robbery at the place, the agency would find out why such huge amount of money should be kept in the zoo when it is not a bank and ensured it gets to the root of the matter.
On why his led commission spared the state governor, Alhaji Abdullahi Ganduje , from investigation and possible prosecution over an alleged bribery collection from state contractors, he said apart from the fact that governor had immunity covering him from such action, the commission was not carried along by the journalists who investigated the governor.
On her part, country’s director, ActionAid, Nigeria, Mrs Ene Obi, said the issue of corruption in government circle and also in private sector was not only disturbing but increasingly killing us to death as a country.
She said corruption had distorted competition and trade, reduced investments and slowed development, widened economic and social inequalities, heightened injustice and insecurity and that it was high time for citizens to rise up and demanded accountability, especially from the public office holders across tiers of government.
Top Stories