The suspects were nabbed at different locations in Ibadan by men of the Economic and Financial Crimes Commission. 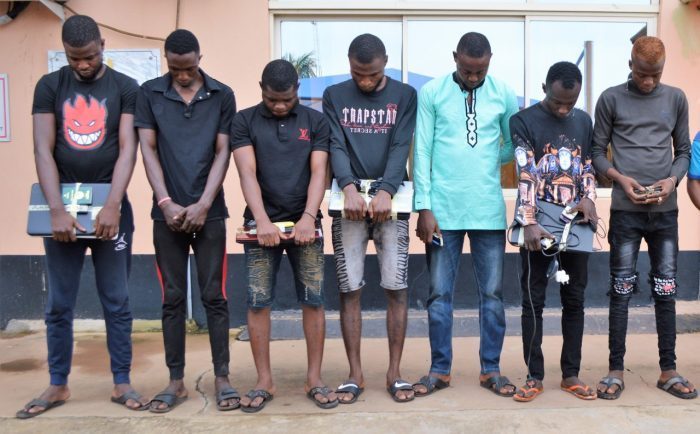 The suspects
The Economic and Financial Crimes Commission, EFCC, Ibadan zonal office, on Wednesday arrested nine suspected internet fraudsters.
The suspects, ranging between the ages of 21 and 30, were apprehended at different locations at the Airport Road, Alakia Area of Ibadan, the Oyo State capital.
Following series of complaints from neighbours and victims of their alleged fraudulent activities, operatives of the Commission stormed their hideout in the early hours of Wednesday to effect their arrest.
The suspects are: Abdulmumini Fatai, Hazzan Azeez Junior, Adeleke Oluwaseyi, Atolagbe Dami Timileyi, Emmanuel Oluwaseun, Kehinde Ridwan, Alarape Sodiq, Ahmed Mufutau, and Quadri Opeyemi.
The team recovered valuable items from the suspects, including laptops, different models of iPhones, other brands of phone and several fraudulent documents suspected to be used to defraud unsuspecting people.
The Commission’s investigators in the zone are already interrogating the suspects, as well as subject the items and documents recovered to critical scrutiny.
They will be charged to court as soon as investigations are completed.
Top Stories