Photo Of Herbalist Who Defrauded Korean Man Of N30million (Photo)


A herbalist who impersonated the Group Managing Director of the Nigerian National Petroleum Corporation to defraud a Korean man N30 million has been apprehended. 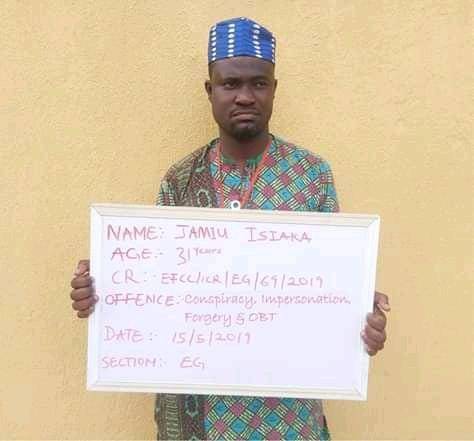 A prosecution witness, Dare Folarin, has told Justice M. Abdulgafar of a Kwara State High Court, sitting in Ilorin, how a self-acclaimed herbalist, Jamiu Isiaka, defrauded a Korean national, Keun Sig Kim, of about N30 million in an oil and gas contract scam.
Isiaka was arraigned on June 14, 2019 for impersonating Maikanti Baru, Group Managing Director of the Nigerian National Petroleum Corporation, NNPC, and Femi Adesina, Special Adviser on Media and Publicity to President Muhammadu Buhari, to defraud Kim.
He is facing a four-count charge of impersonation, forgery and obtaining money under false pretence in the guise of helping Kim secure an NNPC approval/marketing form and licence certificate to buy crude oil in Nigeria.
At the resumed sitting, on June 19, 2019, Folarin, the Second-in-Command, at the EFCC’s Ilorin Zonal Office, testifying as the first prosecution witness, narrated how Isiaka used the names of top senior government officials to deceive and defraud Kim in the guise of helping him secure licence from the NNPC.
Led in evidence by O.B. Akinsola, he said: “A petition was written to the Executive Chairman of the EFCC by the complainant, in which he alleged that some fraudsters collected over N30 million from him all in the name of helping him secure licence from the Nigerian National Petroleum Corporation.
“The herbalist sent several documents, which he claimed emanated from the NNPC and had the names of some top government functionaries like, the GMD of NNPC, Dr. Maikanti Baru, Special Adviser to the President on Media and Publicity, Mr. Femi Adesina, National Commissioner with the Independent National Electoral Commission, Mrs. Amina Zakari, among others.
“Several foreign currencies were paid into Isiaka’s domiciliary account in UBA by the petitioner, and the bank confirmed that the defendant is the sole signatory to that account, from which he made the withdrawal through a written instruction.”
He further told the court that in the course of investigating the petition, the EFCC wrote to the NNPC to confirm the genuineness or otherwise of the documents Isiaka sent to Kim.
“They replied us that all the documents were fake,” he said, adding that they never emanated from the NNPC.
He further told the court that under interrogation, Isiaka claimed that he travelled to Ijebu-Igbo in Ogun State, to buy the skull of a lion for N400,000, the skin of elephant for N500,000 and vulture for N330,000 among other items to conduct sacrifice for Kim.
Justice Abdulgafar, while adjourning to June 25, 2019 for further hearing, admitted as exhibits, all the items recovered from Isiaka’s house including, a Toyota Corolla car, a Plasma Television, Home Theater, Refrigerator, Air Conditioner, and a Generator.
Top Stories