Popular wrestler, Adrian McCallum has died at a young age after dropping a final haunting message on Twitter. 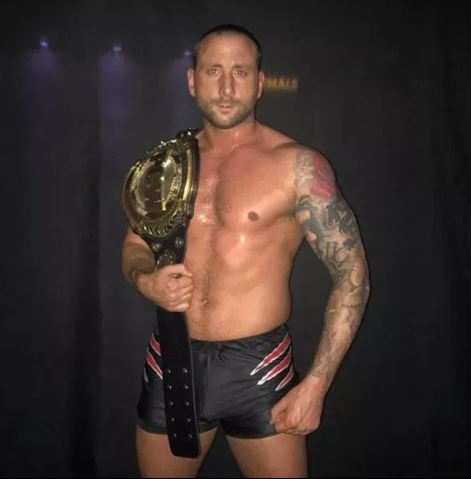 Adrian
British wrestler, Lionheart has died at 36 - hours after posting a haunting message online.
The world heavyweight champion said: "One day you will eat your last meal, you will hug your friend for the last time".

His message - a direct quote from Ricky Gervais' hit Netflix comedy After Life - was posted on Twitter on Wednesday morning.
Lionheart, whose real name was Adrian McCallum,wrote: "One day you will eat your last meal, you will smell your last flower, you will hug your friend for the last time.
"You might not know it's the last time, that's why you must do everything you love with passion."
The famous line was said by Gervais' character, Tony Johnson, who is mourning the death of his wife.
Insane Championship Wrestling (ICW) announced the tragic news on their official page tonight.
He was the wrestling firm's current world heavyweight champion.
Lionheart, from Ayr, Scotland, had been a top wrestler for the last 10 years.
He appeared on a host of popular shows including WWE and TNA and was one of the UK's most famous wrestlers.
Fellows wrestling stars paid tribute to the star.
WWE superstar Paige tweeted her tribute, and remembered another tragic British wrestler Kris Travis, who died of stomach cancer in 2016.
The former wrestler - real name Saraya-Jade Bevis -  wrote: “Breaks my heart. RIP my friend. You were always so wonderful to me and I’ll be forever grateful that I knew you. Give Trav a big hug from me.”
WWE wrestler Cedric Alexander said he was "crushed" to hear of McCallum's death.
He tweeted: “I’m crushed to hear the passing of Adrian ‘Lionheart’ McCallum.
“I may not have known him very well but he was one of the first people to welcome me with open arms when I took my first tour to the U.K. #RIP Lionheart.”
***
Source: The Sun UK
Top Stories