The man said the neighbour showed total disrespect for his father which made him very anger. 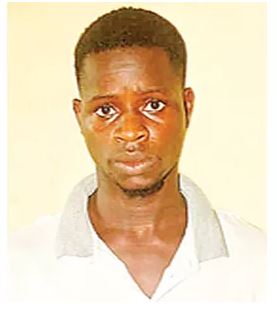 John Joshua
A 23-year-old man, John Joshua, of Zazzaga village in Munya Local Government Area of Niger State, has been arrested for allegedly killing his neighbour.
NewTelegraph reported that Joshua stabbed Yohanna Ali of the same address to death, following a misunderstanding between the deceased and his father, Umar Parage, of Zazzaga.
Joshua was trailed and arrested by a team of policemen attached to the Sarkin-Pawa Division following a tip-off.
The deceased’s father had earlier reported that he had a misunderstanding with the suspect’s father, on May 24, which was settled by another neighbour.
The suspect, on hearing what happened between his father and Ali, allegedly attacked the deceased with a knife and killed him.
Further findings have it that the suspect killed Ali for exchanging words with his father, which he described as “lack of respect.”
The suspect told our correspondent that he killed Ali for disrespecting his father, which, he said, was unacceptable.
He said: “I killed him because he insulted my father. He forgot that I would confront him. I have never insulted his father before, so why should he disrespect my father? When I confronted him, he did not show any remorse; rather he asked what I would do. So, I stabbed him in his ribs, which caused his death. For this disrespectful act, in his next world, he wouldn’t disrespect elders.”
The state Police Public Relations Officer (PPRO), Mohammed Abubakar, said: “The suspect confessed to the crime. The matter would be charged to court after investigation.”
Top Stories