Ruiz Jr shocked boxing fans and pundits when he knocked down Joshua four times on June 1 this year. 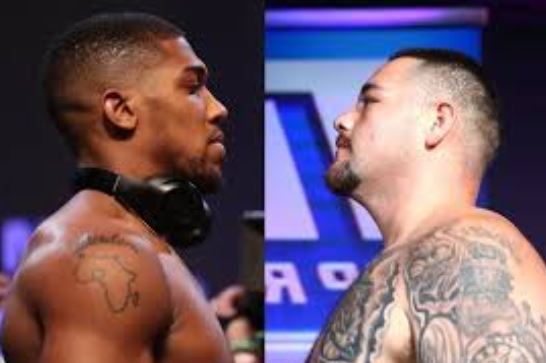 Anthony Joshua and Andy Ruiz
The World Boxing Organization (WBO) has named Oleksandr Usyk as the mandatory challenger to the winner of the rematch between Anthony Joshua and Andy Ruiz Jr, SportsMail reports.
Ruiz Jr shocked boxing fans and pundits when he knocked down Joshua four times on June 1.
The rematch is expected to take place in November this year.
Whoever wins will have to face the Ukrainian Usyk, who once held all four world titles at cruiserweight level.
Usyk stepping up from the cruiserweight division as WBO champion has thrown another spanner in the works for Anthony Joshua, who had previously been trying to secure a fight with Deontay Wilder.
Usyk knocked out Tony Bellew in November in his final match in the cruiserweight division.
He has now won all 16 of his professional fights with 12 wins coming by knockout.
Top Stories