A soldier has been filmed writhing in pain after his legs were destroyed by Boko Haram terrorists during a fight. 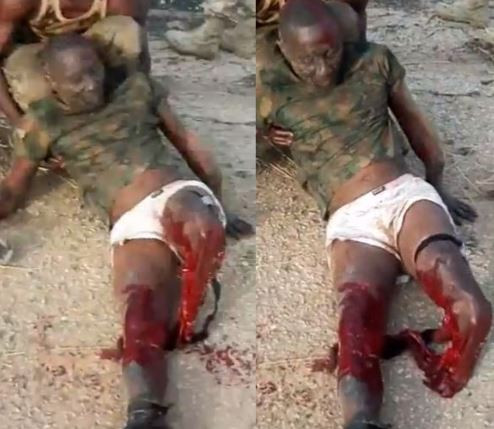 The soldier had his legs destroyed in a fight with Boko Haram terrorists
A video and photo have emerged showing a Nigerian soldier in pains after his legs were destroyed in a bloody fight with Boko Haram terrorists.
Reno Omokri, former aide to ex-President Goodluck Jonathan shared the video on his social media page urging his fellow citizens not to see soldiers as cowards.
Watch below:

WATCH this video of Nigerian soldiers fighting Boko Haram terrorists. They are NOT displaying "insufficient commitment to a common national and military course". They are not COWARDS. They are HEROES! #NigerianSoldiersAreHeroes pic.twitter.com/gMkj9pkeag