Nigerian Nobel Laureate, Soyinka has finally shared his own side of the story in the plane seat saga. 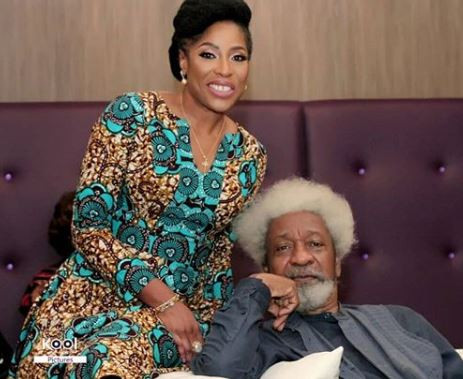 Mo and Soyinka
Professor Wole Soyinka has reacted to the unusual encounter between him and a plane passenger that led to national debate in the last 24-hours.
Recall that mixed reactions have trailed the conversation about the incident where a young Nigerian man 'ordered' Wole Soyinka, out of his seat onboard a flight over the weekend and Mo Abudu's initial reaction to the story also made her a target online.
Media mogul, Mo Abudu has shared Wole Soyinka's own side of the story.
Abudu while reacting had said:  'I will not comment further on this, however as you all know I LOVE and RESPECT Professor Wole Soyinka dearly. Based on this incident, I did receive an email from Professor Wole Soyinka this morning'.
Below is Professor Wole Soyinka's reaction to the whole saga as shared by Mo Abudu:
Hallo Mo,
Someone sent me Patrick Tonye's comment on the plane incident, and I saw your brief comment. It was a very minor thing and I'd forgotten all about it. However, after reading the boy's response, I became curious.
First, I never exchanged a word with him throughout beyond inviting him to take his allotted seat. Never spoke a word to him after that. Certainly never exchanged contact. So of course, I wonder if it's the very individual  who's posted this or a total fake.
The phenomenon of stolen identities takes very strange dimensions and has become a source of worry. I wonder if this is one such. Any way of your finding out. I don't operate in the social media as you probably recall.
WS
Top Stories