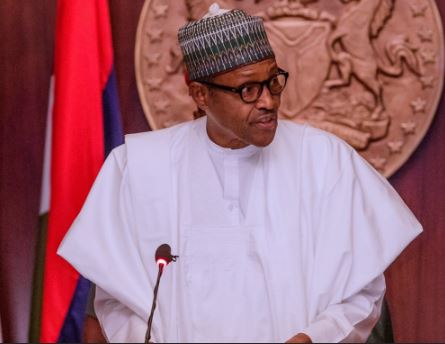 President Buhari
President MuhammaduBuhari has approved part of the funds for the Super Eagles campaign at the 2019 Africa Cup of Nations in Egypt, Punch Metro reports.
This was made known in a media statement made available to Sports Extra by the Nigerian Football Federation Communications Department on Tuesday after the players staged a protest over their outstanding bonuses and allowances at the Helnan Palestine Hotel in Egypt.
The protest saw the Eagles shun Wednesday’s pre-match conference and they were 20 minutes late for training ahead of the Group B game against Guinea.
NFF’s vice president, SeyiAkinwunmi, confirmed that the federation received part of the money on Tuesday morning and immediately started the process to convert the money to US Dollars to pay the players their only outstanding entitlement – the win bonus for the match against Burundi in Alexandria on Saturday evening – and for subsequent matches.
“We want to specially thank President MuhammaduBuhari for his keen interest in resolving this matter quickly, which has enabled us to receive part of the money in record time,” Akinwunmi said.
“We have immediately started the process of converting the money to American Dollars at the Central Bank in order to pay the players the bonus for the win over Burundi three days ago as well as plan for subsequent games.”
Akinwunmi disclosed that the players and officials have been paid their camp allowances up to the last day of the group phase matches at the AFCON 2019, as well as the appearance fee for the friendly against Zimbabwe in Asaba on June 8.
“We have paid these monies through our funds managers, Financial Derivatives Company on Monday, June 24, 2019.
“The only issue we had was that some of the players did not send their bank accounts and instead authorised their banks to pay their monies to some other individuals. The banks requested clear authorisation for this to happen.
“I was on a telephone discussion with the captain of the team Mikel Obi this morning and can safely say that all clarifications have been made and the usual cordial relationship and understanding between the players and the administrators is still intact.

“I have challenged them to go all out and win the trophy assuring them that their money all the way to the final is guaranteed. It’s now for the players to focus on the championship and deliver glory to the nation. I have no doubt of their ability to do that.”
Top Stories