According to Adurogboye, initial reports indicate that the helicopter is owned by Tropical Arctic Logistics Limited, with registration number 5N-BVQ and aircraft type AW139. 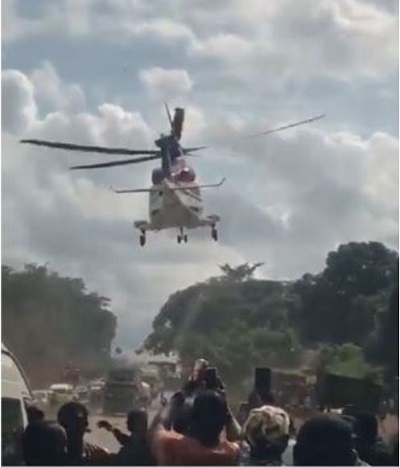 The Nigerian Civil Aviation Authority has commenced an investigation into the landing of a helicopter on the Benin-Ore Road a few days ago, to pick up a yet-to-be-identified passenger.

The General Manager, Public Relations, NCAA, Mr Sam Adurogboye, on Tuesday, said the regulatory agency was aware of the viral video of the helicopter that landed on the highway and had commenced investigations.

A video had gone viral on social media platforms on Sunday, showing a helicopter that landed on the road, between cars in a traffic jam, to pick an unidentified stranded person.

According to Adurogboye, initial reports indicate that the helicopter is owned by Tropical Arctic Logistics Limited, with registration number 5N – BVQ and aircraft type AW139.

A source from Tropical Arctic Logistics Limited, who spoke on condition of anonymity, told our correspondent that the helicopter was cleared to carry out the flight.

The source said contrary to the speculations that the helicopter was sent to pick up a lady, it was a medical emergency.

He said the airline was contacted to evacuate a person who had suffered a heart attack.
Top Stories