Love In The Air! Man Proposes To His Girlfriend Of 5 Years On A Plane (Video)


An apparently lovestruck man has staged a romantic proposal to his girlfriend inside a plane in front of other passengers. 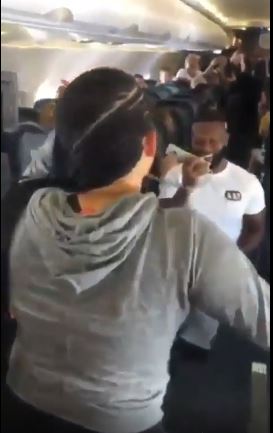 Man Proposes To His Girlfriend On A Plane
A video has emerged online showing the moment a man proposed to his girlfriend inside a plane as other passengers watched.
The man whose identity is yet unknown, decided to surprise his woman with the proposal in the most public way while they journeyed by air and his girlfriend was absolutely stunned by it.
In the video, the man is seen speaking into the public address system on the plane, telling his co-passengers that he has been with his girlfriend for the past 5 years and that he really loves and would like to propose to her.
He consequently went down on one knee while his girlfriend walked up to where he was and accepted the ring he held up in his hands. The entire plane erupted in cheers as people clapped happily for the couple.
Watch the video video: