At least 200 accommodation seekers have been left in a state of pain after being scammed by an estate developer. 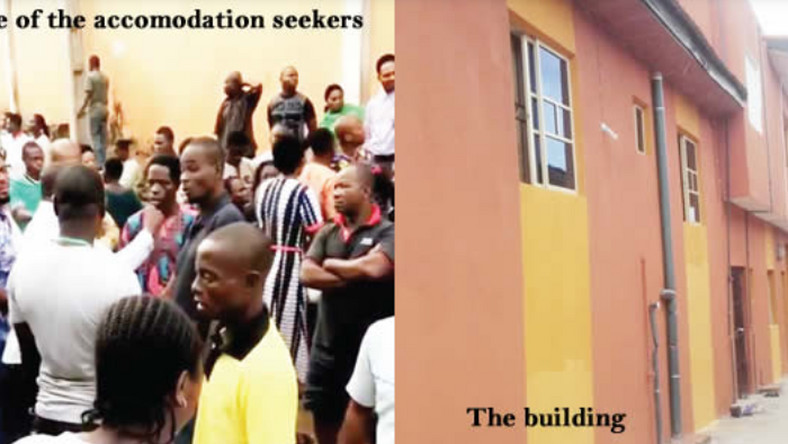 The people and the house
A real estate developer, Alabi Idowu, has been arrested by the police for allegedly defrauding over 200 intending tenants in a newly-constructed building at No. 1 Karimu Street, off Oyebanjo Street, Alapere, Ketu, Lagos State.
According to Punch, the developer allegedly also posed as the landlord of the building to defraud the prospective tenants to the tune of N50m.
The developer, while negotiating with the accommodation seekers, reportedly informed them that finishing touches had to be applied on the building before they could move into their flats.
After payment, Idowu reportedly told his victims to meet him in the house on Monday, June 24, 2019, to receive the keys to their respective flats.
However, the developer was alleged to have released keys to some of the intending tenants before the agreed date.
One of the intending tenants, who identified herself simply as Shonibare, said over 200 persons were left stranded in front of the building, adding that some claimed to have paid for their flats when the building was at the foundation level.
Shonibare said, “I met him (developer) through my relation, Tobi, who had also paid for a flat in the house. After inspecting the house, the man, who claimed to be the owner of the house, introduced himself as Alabi Idowu. We immediately paid N180,000 into a Guaranty Trust Bank account in the name of Alabi Teslim Idowu, and N150,000 into an Access Bank account with the name, Tunde Adewale, his partner, and he gave us a receipt.
“He told us that he needed to fix the water closets in the flats and asked us to come to the house on Monday, June 24, to receive the keys to our flats.
“But on Saturday, Tobi informed my mum that something was going on with the house and when we got there, we met over 200 people sharing their experience of how they had been defrauded.”
The victims were said to have proceeded to the state secretariat, Alausa, Ikeja, to protest because of the number of people and the amount involved.
During the protest, one of the victims, who did not want to be identified, said the Deputy Governor, Dr Obafemi Hamzat, while commiserating with them, said they should write a petition on the matter.
She said, “I got to the building around 7am and saw a lot of people fighting over the house. I saw about 20 people claiming to have paid for the same flat that I paid for. Over 200 people were tricked into paying for flats in the building and this made us to stage a protest to the state secretariat, Alausa, Ikeja.
“As I speak to you, I am at the Special Fraud Unit, Ikoyi, where the developer is being detained after he was arrested when one of us called him and pretended that he wanted to pay the balance of his rent.
“He (the developer) knew that the man was not in Lagos when the fraud was discovered, so he gave him a location and the man mobilised policemen to arrest him. When we did the calculation of all those he had duped, the amount was over N50m.”
The representative of the original owners of the building, Sharafa Adeleke, said the developer was contracted to build and manage the property for 15 years.
Adeleke stated, “Our agreement was that he would give the family N300,000 and three flats after developing the house. But we were surprised that he kept telling us that he needed to fix some things in the house when it was clear that he had finished developing it.
“I insisted that he should give us the flats we agreed on and he told me to come on Saturday. I was still at home when I started receiving calls that a lot of people were in the premises, but the developer assured me that he would settle the matter before Tuesday.”
The state Police Public Relations Officer, Bala Elkana, said the command’s Special Fraud Unit had arrested the fleeing developer, adding that the original owners of the house were also victims of the fraud.
Elkana stated, “The son of the deceased landlord, Adeleke, had an agreement with the developer to complete the existing bungalow on the land. He also developed new flats on the remaining portion of the land and started collecting money from different persons in order to raise funds for the project.
“The house has only 15 flats but he collected money from over 100 persons and after completing the work, he handed over the keys to 15 persons. The trouble started when the rest of the victims came to occupy the apartments and they met other people there.
“The Special Fraud Unit of the command has arrested the developer, while Adeleke has been invited to the Alapere Police Station to give his statement. There are four developers involved from our record and about 120 victims have reported at our station and the amount collected, according to our calculation, is over N20m.”
Top Stories