A heartless father has been put on the spotlight after allegedly disfiguring his son's face with a hot knife. 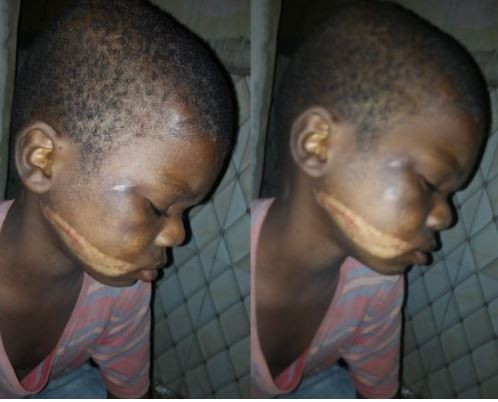 The little boy
A Nigerian Twitter user with the handle @ryann_agada has shared photos and narrated how a man who married a second wife brutally disfigured his son's face with a hot knife for stealing meat from the pot in Cross River State.
According to her, 'his dad always beat him. The scar on his face was as a result of a knife the dad put in the fire and placed on his jaw because he stole meat from the pot'.
See the tweet below:

I have been seeing this little boy for a couple of days, but I thought he was just one random kid that stays around. But he caught my attention yesterday when I saw him standing close to a flower in front of my house... He was acting as if he was hiding from someone...
ðŸ‘‡ðŸ‘‡ðŸ‘‡ðŸ‘‡ pic.twitter.com/leWtJcCJoB