One of the victims, Mr Femi Olaoye, whose house was taken over by flood, said he was helpless as the water entered his siting room and kitchen. 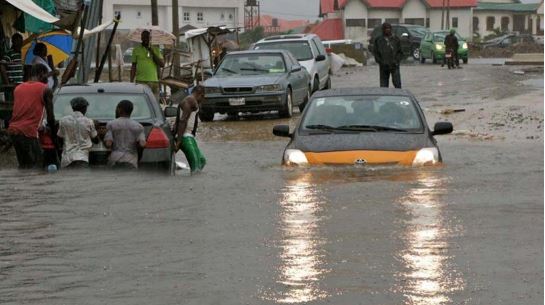 File Photo
Residents of Olunlade Area in Ilorin on Thursday complained about the havoc wrecked by flood on their property as buildings, cars and shops were destroyed after a heavy rainfall.
The News Agency of Nigeria (NAN) reports that the area experienced a heavy downpour around 4pm on Wednesday which lasted for about three hours.
Some of the victims, who spoke separately with NAN, expressed sadness over the terrible occurrence and damage done to their property.
One of the victims, Mr Femi Olaoye, whose house was taken over by flood, said he was helpless as the water entered his siting room and kitchen.
“I was bitter and sad as there is nothing I could do to stop the flood from entering my house. It was only me and my two children at home. I wept bitterly to witness such terrible occurrence.
“All my electronics were damaged beyond repair. Even the bedroom has turned to swimming pool. I am confused,” he said.
Another resident, Mr Yusuf Taiwo said the flood came as a nightmare to him as his furniture, bookshelf and electronics were destroyed by the flood.
“Even some vital documents that I placed on the floor in my room have been destroyed by the flood.
“I don’t know what to do because am confused at the moment. I never expect the extent of the damage done by the flood. It was a shock,” he said.
A shop owner in the area, Mrs Ronke Idowu also said that almost all the provisions in her shop were damaged.
“It is a total loss for me as there is nothing left for sale. All the cartons of biscuit, noodles, sweet and soaps were damaged by the flood.
“Some were on the bare floor in my shop that made it easy for them to be destroyed beyond retrieval,” she said.
Mr Timilehin Olubiyo said he had to abandon the building with his family since the incident occurred because he could not continue to live in the house.
He said, “I immediately move my family to a friend’s house. Even I cannot take ordinary clothes along as all my clothes were damaged.
“It is very unfortunate. I am not happy at all. We want government’s intervention on time.”
Kayode Jimoh, a taxi driver, said his car was a major concern as the car was also submerged in the flood.
He said “I don’t know what to do. I parked it in front of my house and because of the downpour, before I realized it, it was water filled. I can’t move it now because it’s not starting when I try to start it.
“My concern now is how to make a living since I rely on the car for my livelihood. It is only God that can help me so that I won’t be put to shame”.
Top Stories