Many people have escaped tragic death along the Lagos-Ibadan expressway after a tanker crushed some vehicles. 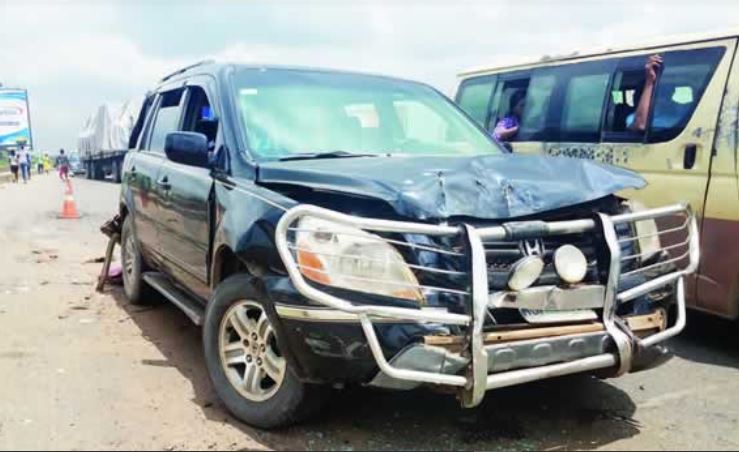 One of the affected cars
According to a report by Punch Metro, no fewer than 35 persons escaped death in multiple crashes involving a fuel tanker and five other vehicles at the Warewa end of the Lagos-Ibadan Expressway in Ogun State on Thursday.
The affected vehicles are a black Honda Pilot with number plate KSF 774 BE; a green Toyota with number plate LSD 513 EZ; a yellow Mazda commercial bus with number plate EKY 25 FQ; a black Nissan Rogue with number plate EKY 254 FQ; a black KIA car with number plate EPE 60 CZ; and a wine DAF tanker with number plate KEF 211 ZD.
Punch Metro reports that the yet-to-be identified tanker driver lost control of his vehicle after it had a break failure immediately after the ‘Long Bridge’.
A mild traffic jam was said to have led to the convergence of several vehicles at the Warewa bus stop at  the time, with the tanker driver crushing five of the vehicles.
A driver, Emmanuel Opara, said he was conveying his boss’ mother to Abeokuta when the tragedy struck.
Opara said, “I was conveying my boss’ mother to Abeokuta, but when we got to Warewa, some military men, who were controlling vehicular movement at the junction, told us to stop for other vehicles to pass.
“But when the military men asked us to move, the tanker came from behind and hit all the vehicles in its front, including the one I was driving.”
A prophet, Akin Adekotujo, said officials of the Federal Road Safety Corps and men of the Ogun State Police Command chased after the tanker, forced it to a stop, arrested the driver and impounded the vehicle.
A driver, Ayoola Shakiru, said the tanker crushed his car, which was conveying seven passengers to Sagamu.
The 30-year-old said, “My vehicle was the last to be crushed; the tanker had crushed about four vehicles before mine. I had to summon courage to turn the steering wheel in order to save the passengers I was conveying to Sagamu.”
One of the passengers, who did not want her name in print, urged the government to stop the movement of tankers during the day to prevent such accidents from reoccurring.
The Ogun State Sector Commander, FRSC, Clement Oladele, said 35 persons were involved in the accident, adding that brake failure and excessive speeding on the part of the tanker driver were responsible for the accident.
Oladele said, “The accident occurred on Thursday, June 27, 2019, around 12.45pm on the Lagos-Ibadan Expressway around Warewa. Thirty-five people made up of 19 males and 16 females were involved. There was no death or injuries from the multiple crashes.
“The suspected causes of the accident were brake failure and excessive speeding inappropriate for that road, which is currently undergoing rehabilitation. Motorists, especially truck and other articulated vehicle drivers, should desist from driving malfunctioning vehicles on the road, and the maximum speed should not be more than 50km per hour.
“Motorists should not tailgate as following closely the vehicle ahead of you impedes the ability to stop your vehicle from ramming into the vehicle ahead in the case of an emergency. The tanker that caused the crash due to a malfunctioning braking system has been impounded and the obstructions cleared for normal traffic.”
Top Stories