Fayose was arraigned alongside his firm, Spotless Limited, on 11 counts bordering on criminal breach of trust, theft and money laundering. 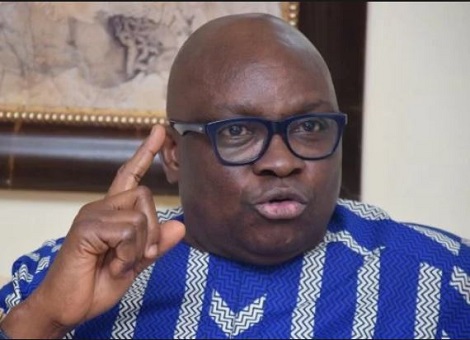 Ayodele Fayose
The planned re-arraignment of a former Governor of Ekiti State, Mr Ayodele Fayose, before the Federal High Court in Lagos was stalled on Friday as the Economic and Financial Crimes Commission said it had begun a new investigation on the ex-governor.

The EFCC had on October 22, 2018, arraigned Fayose for an alleged fraud of N2.2bn before Justice Mojisola Olatoregun six days after he completed his tenure as governor.

He was arraigned alongside his firm, Spotless Limited, on 11 counts bordering on criminal breach of trust, theft and money laundering.

The prosecution had opened trial on November 19, 2018, and called 13 witnesses out of the 15 witnesses listed when the EFCC wrote a petition to the Chief Judge of the Federal High Court, Justice Adamu Abdu-Kafarati, requesting that the case be transferred from Justice Olatoregun before it was subsequently transferred to Justice Chukwujekwu Aneke.

During Friday proceedings, counsel for Fayose, Ola Olanipekun (SAN), informed the court of an application before the court seeking that the matter be returned to the former trial judge, Justice Olatoregun.

Olanipekun later informed the court that the defendants had opted to withdraw the objection to the arraignment.

Upon the withdrawal of the objection by the defence, counsel for EFCC, S.A Obafemi, informed the court that the arraignment of the ex-governor could not go on as he was being investigated in other matters.

However, Justice Aneke upheld the prayer of the EFCC and adjourned till July 2 for re-arraignment.
Top Stories