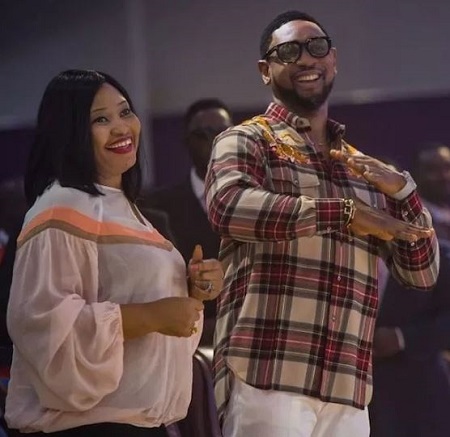 Pastor Omodele Fatoyinbo, wife of the Senior Pastor of the Commonwealth of Zion Assembly in Guzape, Abuja, Pastor Abiodun Fatoyinbo, says her husband is not a rapist.

Mrs. Fatoyinbo said, “My husband is not a rapist. Even if he was not a believer, he would not be a rapist.”

Before she could complete her speech, however, her husband quickly grabbed the microphone and said, “the elders are handling the matter.”

Our correspondent, who is currently in the church auditorium, reported that although church service usually ends at 12 pm, the service was already rounding before 11 am while no sermon was delivered.

Mrs. Busola Dakolo, the wife of popular musician, Timi Dakolo, had on Friday accused Fatoyinbo of raping her 20 years ago.

The allegation caused a storm over the weekend with groups calling for the arrest of Fatoyinbo while some of his supporters have stayed by his side.

The COZA founder has, however, denied all the allegations levelled against him.
Top Stories