A man has had his life cut short in a most shocking manner after his friends dared him to eat a wall gecko at a party. 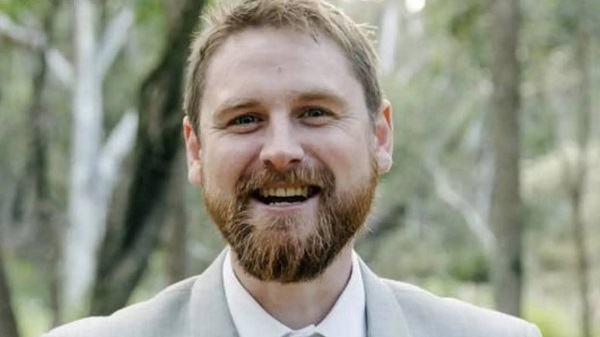 Dowell
Australian father-of-three David Dowell was in “absolute agony” before he died, suffering from a salmonella infection potentially caused by a Christmas party dare involving a gecko.
More than six months on, his family is still searching for answers after hearing conflicting accounts from those who were at the party and going without details from the coroner.
It would have been David’s 35th birthday last Tuesday, June 25, but instead of celebrating, his family held a vigil.
Beside the Logan River where he liked to go fishing, they placed paper boats in the water with messages they never got to tell him.
David left behind partner of 15 years Allira and three daughters – Alyssa, Claudia and Sage – as well as four siblings and nieces and nephews, one of whom was born four weeks after his death.
Hannah Dowell, David’s sister, said nobody had a bad word to say about her brother.
“He was one of a kind … just a great person and the kids have lost one of the best dads ever,” she said.
On Saturday, December 1, David went to a Christmas party. The next day he didn’t feel well but thought it was just a hangover.
“Then on Monday, it was coming out both ends and he was really sick and the moment he started throwing up and it was green, that’s when they rang the ambulance,” Hannah said.
“When they got there, the (paramedics) didn’t even want to take him (to hospital). They said he just had gastro and his partner said: ‘no, you’ve got to take him; it’s not just gastro’.”
On Tuesday, December 4, David was diagnosed at the Mater Hospital with a salmonella infection.
Salmonella is a foodborne pathogen, which can also be transmitted from person to person.
The bacteria attach to small intestine cells and start multiplying, causing a gut infection, but in severe cases, the bacteria can move into the bloodstream.
In most cases, it only causes diarrhea, stomach cramps and fever, but in compromised patients, those with health conditions or the young and old, it can be much more severe.
David’s family thought chicken was the cause of the salmonella.
Then on the Sunday, according to Hannah, David’s partner, Allira, was talking to one of his friends and remembered “Oh, David ate a gecko that night I’m pretty sure”.
“She [David’s partner] told the doctor and the doctor said ‘that could have been it’,” Hannah said.
“But there has been no evidence that he actually ate it because there was: ‘Oh yeah I saw him eat it’. And then: ‘No, I didn’t see him eat it’.
“It was a dare, so he might have intended to eat it and then thrown it away.
“At the end of the day, we don’t know whether he actually ate the gecko. David never mentioned it.”
University of Queensland school of agriculture and food sciences deputy head Mark Turner said the gecko theory was plausible.
Dr Turner said a wide range of warm- and cold-blooded animals carried salmonella, including turtles, snakes, frogs and geckos, which have the bacteria in their gut.
“It’s possible that if the gecko was eaten, as it was being digested, the salmonella was released, but I have never heard of anything like this before,” he said.
“It just goes to show that things as innocent as geckos can carry disease bacteria.”
In the Mater, David was not well and his symptoms were particularly confronting.
Hannah said he was very bloated, resembling someone six months pregnant. His urine was black, his vomit was green and after a few days he had fluid on his lungs.
“When I went up and saw him, he was just in absolute agony,” she said.
“Mum was asking them (doctors) because he had a blockage, ‘can’t you just operate?’ They said no.”
David’s mother, Michelle, said fluid leaked from his stomach.
“His testicles were swollen up to grapefruits and there was fluid leaking from them and they [doctors] said that was normal, it was just all of the fluid in his stomach cavity,” she said.
The Mater Hospital could not go into detail regarding David’s case because of patient confidentiality.
Read Also: Dead Body of Stowaway fall from Kenya Airways Plane
“Mater offers its deepest condolences to the family of Mr David Dowell. Mr Dowell’s case was referred to the Coroner, who determined Mater had provided appropriate care and no further action was required. Mater is unable to comment further on the case due to patient confidentiality.”
In a statement, the Coroners Court said: “After consideration of the hospital records, the coronial registrar finalised the investigation by authorising the cause of death certificate to issue without coronial autopsy.”
David was described as “a big kid” who loved gardening. He once wandered off at Oktoberfest to go to the toilet and his family found him in the smoking area talking to everyone.
“That was the kind of person he was … I’m so grateful that I got to spend time with him. I’m glad that he was my brother,” Hannah said.
“We went to the local pub and people who didn’t really know him [David] were coming up and saying how awesome he was.”
David’s family said they hoped another family would not have to go through what they had.
“Look out for the signs and realise how bad salmonella can be, so we can prevent it from happening to someone else,” Hannah said.
(www.newsnow.co.uk)
Top Stories