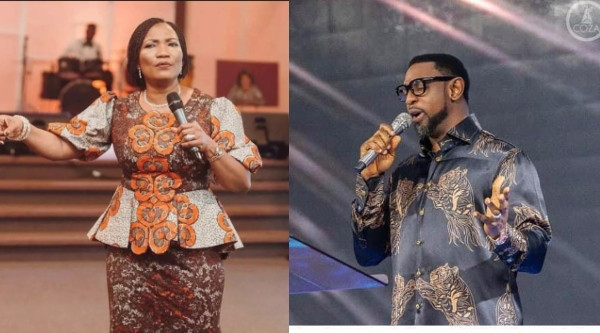 Funke and Fatoyinbo
Pastor Funke Adejumo has reacted to the r*pe allegation against Pastor Fatoyinbo by Busola Dakolo, which led to protests and his stepping down as the Senior Pastor of Commonwealth of Zion Assembly.
Pastor Funke who, alongside her husband, Pastor Felix Adejumo was accused of restraining Pastor Fatoyinbo from reacting when Ese Walters first accused him of having a s*xual relationship with her in 2013, disclosed that it took her time to publicly react to the recent rape allegation because "work has to be done to enable the process of resolution."
The Agape Christian Ministries Pastor noted that the COZA founder sees her and her husband as mentors She expressed sympathy to everyone who has experienced broken trust from the church including Busola Dakolo.
She wrote: "THE PAST FEW DAYS HAVE BEEN HEAVY, NOT JUST IN A GENERAL SENSE OF A NATIONAL RECKONING BUT IN A VERY PERSONAL SENSE AS SOME OF US WHO PASTOR BIODUN FATOYINBO, THE FOUNDER OF THE COMMONWEALTH OF ZION ASSEMBLY CONSIDERS LEADERS AND MENTORS IN THE FAITH HAVE WORKED QUIETLY BEHIND THE SCENES FOLLOWING THE SERIOUS ALLEGATIONS OF RAPE MADE BY BUSOLA DAKOLO.
"IT HAS TAKEN ME TIME TO SPEAK PUBLICLY ABOUT THIS BECAUSE WORK FIRST HAD TO BE DONE TO ENABLE THE PROCESS OF RESOLUTION. THIS WAS THE MORE URGENT, PERSONAL TASK.
"TODAY, I AM THANKFUL TO GOD FOR THE COUNSEL THAT HAS SEEN BIODUN STEP DOWN TO ALLOW THE PROCESS OF FACT FINDING, HEALING, RESTITUTION AND JUSTICE CONTINUE.
"ALSO SO THAT THE CONGREGATION THAT GOD HAS ENTRUSTED INTO OUR HANDS ARE GUIDED WITH LOVE, INTEGRITY AND WISDOM.
"THE HOUSE OF GOD SHOULD REMAIN A SAFE SPACE FOR ALL. NO FORM OF ABUSE SHOULD HAVE A PLACE IN GOD'S HOUSE.
"MY DEEPEST SYMPATHY IS WITH EVERYONE WHO HAS EXPERIENCED BROKEN TRUST FROM THE CHURCH. BUSOLA. EVERY GIRL. EVERY BOY. EVERY CHILD. MAN. WOMAN.
"THE CHURCH IS EMBRACING ACCOUNTABILITY – AND IT IS EXACTLY AS JESUS HAS REQUESTED THAT WE MUST
"FFA... HONORING GOD AND BLESSING HUMANITY"
Top Stories