Horror! One Dies, Another Injured As Tanker Explodes In Kano


One person has died and another has been injured after a tanker exploded in a community in Kano state. 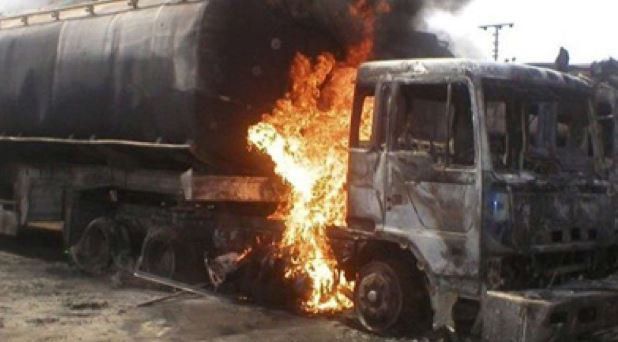 File photo
One person has been confirmed dead while another sustained injury when a tanker filled with gasoline (diesel) exploded at Rano road in Bunkure, Bunkure Local Government Area of Kano State.
The Spokesman for Kano State Fire Service, Alhaji Saidu Mohammed, told the News Agency of Nigeria (NAN) in Kano that the accident occurred at about 8.52 a.m on Thursday.
“We received a distress call from one Malam Mohammed at about 08.52 a.m that there was a tanker that was gutted by fire on Rano road.
“On receiving the information, we quickly dispatched our personnel and vehicle to the scene of the incident at about 09.10 a.m to rescue the victims,” Mohammed said.
He said that the tanker’s plate number could not be completely identified due to the fire.
Mohammed attributed the accident to speed limit violation which, he said, resulted in loss of control by the driver.
He said two people were involved out of whom one had died while the other sustained injury, adding that the victims had been handed over to officials of the Federal Road Safety Corps (FRSC).
Mohammed gave the names of the victims as Malam Danladi, 45, and Abubakar Ya’u, 35.
He appealed to motorists to always obey traffic regulations so as to stay alive and minimise accidents on the road.
Top Stories