Protest As Bandits Kill Over 10 In Katsina


Some of those injured have been rushed to hospitals in Dutsinma for treatment while the corpses of the dead have been used for protests. 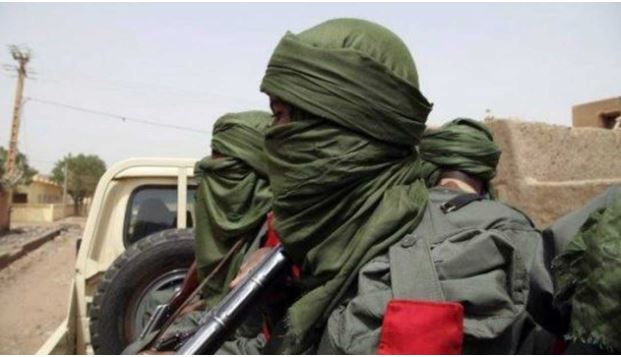 File Photo
More than 10 people were feared killed on Wednesday evening by bandits who attacked four communities in two local government areas of Katsina State.
It was learnt that dozens of the armed bandits who rode on motorcycles stormed the communities in Danmusa and Kankara council areas to commit the crime.
The Guardian learnt that the bandits first attacked Unguwar Nagwade community where they killed four people, then proceeded to Unguwar Rabo where they killed nine persons and later moved to Gidan Daji where they killed two residents, all in Kankara council area.
The same bandits stormed Danmusa council area where they attacked traders at a market in Maidabino community. Sources said more than a dozen people were killed and others injured while trying to flee for safety.
Some of those injured have been rushed to hospitals in Dutsinma for treatment.
In protest, dozens of angry residents of Kankara and Danmusa councils yesterday stormed the palace of the Emir of Katsina, Alhaji Abdulmumini Kabir Usman, with bodies of 10 of the victims of the attacks.
Some of the protesters who wept bitterly expressed anger over the incessant killings, urging the government to stop the attacks. They lamented that most of their people who depend on farming were afraid to go to their farms because bandits could attack them at any time.
The emir, along with several other traditional leaders who received the protesters, sympathised with them, assuring the people that the government was doing everything within its ability to address the challenges posed by insecurity in the state. The bodies of the victims were later taken to the Dan Takum graveyard, which is a few meters away from the palace, for burial.
A few weeks ago, there was a similar incident when angry residents stormed the emir’s palace with bodies of 12 persons killed by bandits in Batsari council area.
The protesters yesterday also went to the Government House where Governor Aminu Bello Masari said the government would not leave them to the challenge.
But the spokesman for the police command, Gambo Isah, said 11 people lost their lives in Kankara, while two were killed in Danmusa council area.
The fresh attack on Katsina communities came as the heads of the nation’s security agencies yesterday met with President Muhammadu Buhari in Aso Rock, Abuja, where they briefed him on the new strategies deployed by their operatives to tackle the menace of insecurity in the country.
Emerging from their closed-door meeting with the president, the Chief of the Air Staff, Air Marshal Sadique Abubakar, who brief journalists said that the new strategies had begun to yield results.
Air Marshal Abubakar said although the new tactics were working and yielding the desired outcome, there was the need for all hands to be on deck towards ensuring a secure Nigeria where every citizen goes to sleep with both eyes closed.
According to him, Nigerians must not hesitate to provide relevant information to the security agencies for rapid response from the operatives who are already placed on standby to neutralise any untoward situation in any part of the country.
“So far, the strategy that we have on ground is really working and that is the one we will continue to pursue.
“What we are going to do is to ensure that all hands are on deck, and every Nigerian equally has a role to play by passing relevant intelligence to us.
“The armed forces of Nigeria and other security forces will continue to work much harder to ensure that every Nigerian is secure and the territorial integrity of Nigeria is not undermined by anybody,” he declared.
Those at the meeting include Chief of Defence Staff, Gen. Gabriel Olonisakin; Chief of Army Staff, Lt.-Gen. Tukur Buratai; and Chief of Naval Staff, Vice Admiral Ibok Ekwe-Ibas, represented by Bee Ibe-Onwo.
The National Security Adviser, Maj.-Gen. Babagana Monguno (rtd), Director-General of the National Intelligence Agency, Ahmed Abubakar; Inspector General of Police, Mohammed Adamu and the Director General, Department for State Service (DSS), Yusuf Bichi were also at the meeting.
Meanwhile, the Nigerian Army has said that troops of Operation Lafiya Dole will continue to map out and attack enclaves of Boko Haram terrorists to smoke them out and end the insurgency in the northern part of the country.
The smoking out operation commenced this week when on Tuesday, troops of 212 Tank Battalion, repelled Boko Haram attacks on Gajigana community in Borno State.
The General Officer Commanding (GOC) 7 Division and Commander Sector 1, Operation Lafiya Dole, Brig-Gen. Abdulmalik Biu, who made the promise while addressing soldiers at Gajigana for their gallantry, urged them to protect lives and property. He lauded the troops for successfully repelling Tuesday’s attack of Boko Haram insurgents.
The Gajigana resistance came barely two days after the troops repelled a similar attack on 120 Battalion, Goniri, Yobe State and recovered five gun trucks and a cache of arms and ammunition. He said the insurgents who mounted gun trucks attempted to infiltrate and attack the forward operation base at 212 Tank Battalion, Gajigana last Wednesday night. “The terrorists, however, faced stiff resistance by troops in the community.”
Top Stories