Days after meeting President Buhari and stepping down for Lawan, FG has withdrawn corruption charges against Goje. 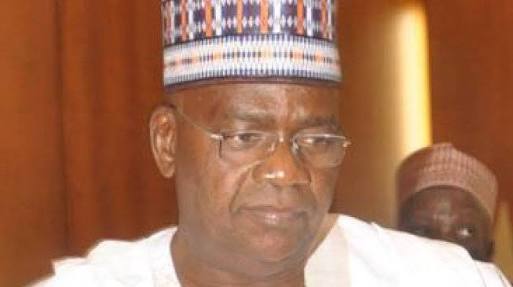 Senator Danjuma Goje
Senator Danjuma Goje has been discharged of the corruption charges filed against him.
This is coming after the office of the Attorney-General of the Federation (AGF) applied for the withdrawal of the charges on Thursday evening at the Federal High Court sitting in Jos, Plateau State, according to a Punch report.
The remaining two counts charge were subsequently squashed.
FG's latest decision is coming days after Goje met with President Muhammadu Buhari and stepped down for Senator Ahmed Lawan to contest for the Senate President seat which he later won.
The Economic and Financial Crimes Commission had since 2011 filed a 21-count charge against Goje, but 19 of the charges were struck out in March 2019, leaving only two counts.
The presiding judge, Justice Babatunde Quadri, had while ruling on the “no-case” submission filed by Goje through his lawyers on September 14, 2018, discharged him and other defendants on 19 of the 21 counts. He held that the defendants had a case to answer on counts eight and nine and ruled that they should open their defence on May 8, 2019.
Goje is standing trial along with a former Executive Chairman of the state’s Universal Basic Education Board, Aliyu El-Nafaty; and S.M. Dokoro for an alleged N5bn fraud. A fourth defendant, the ex-governor’s cousin, Sabo Tumu, who is now late was removed from the charge sheet.
Meanwhile, the Office of the Attorney-General of the Federation took over the case filed against the former governor from the EFCC on June 7, shortly after he (Goje) agreed to step down for Ahmed Lawan in the race for the position of the Senate President.
Goje had come under intense pressure from the ruling All Progressives Congress and the Presidency to drop his bid to pave the way for Lawan, who was the preferred candidate of the party for the position.
When the case came up for hearing on Friday, the counsel from the OAGF, Pius Akutah, told the court that, “My Lord, we have an application having taken over the case and reviewed the 21 count charges of no submission and by the ruling of this court quashed 19 leaving only two count charges in which they are to enter defence.
“As it is, the Federal Ministry of Justice wishes to withdraw those two charges against the accused persons. This action is in line with the power vested in the AGF by virtue of Section 128 of the Administration of Criminal Justice Act 2015 particularly sub section 1 of that section (128).
“It’s in accordance with the power vested in the AGF by the constitution that we wish to withdraw the charges before your Lordship. This is our humble application and (we) urge your Lordship to grant our application.”
Responding, the counsel for Goje, Mr Adeniyi Akintola (SAN), did not oppose the application.
He said, “My Lord, we are not opposing the application but we are urging your Lordship to evoke the provision of section 2(a)(b) of the Administration of Criminal Justice Act 2015 and acquit them of the charges.
“The same section gives your Lordship the discretionary power to make an order for the accused persons to be discharged and acquitted. My Lord has the power under Section III.
“As we urge your Lordship to consider our humble application, we wish to thank you for your patience with us since 2011 when we started this journey on the case. We also wish to commend the AGF for (the) wise decision in bringing this case to an end.”
In his ruling, the judge said pursuant to Section 174(1) particularly sub-section (b) and coupled with Section 108 (2) of 2015, “the application by the AGF to withdraw the charges is hereby granted.” “The accused persons are hereby discharged,” the judge held.
Top Stories