A son of the Kaduna state governor has threatened to take action against President Muhammadu Buhari. 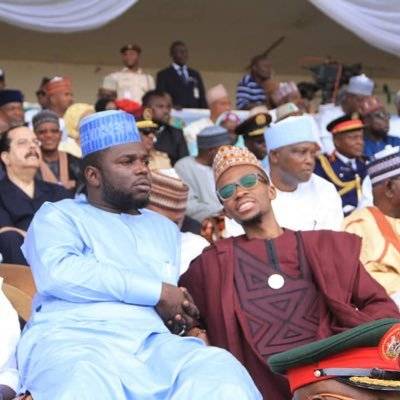 Bello (left) said he will protest against Buhari's appointments
Bello, a son of Kaduna State Governor, Nasir El-Rufai, has expressed concerns over recent appointment made by President Muhammadu Buhari, threatening to protest the re-appointment of some ministers and aides who served in his first term, according to a report by Sahara Report.
The Kaduna State governor’s son said if Buhari re-appoints same set of ministers, he would lose the trust of Nigerians.
“We trust you, Mr. President. It has nothing to do with partisanship. It has nothing to do with your cult following that only fools deny. But recent appointments aside, if some Ministers return, well, that trust will become very unsteady. We are not PDP, you will hear us!” Bello tweeted Friday night
However, his threat went unheeded as against expectations, President Buhari approved the re-appointment of Boss Mustapha as Secretary to the Government of the Federation and Abba Kyari as Chief of Staff to the President.
A statement by Presidential Spokesperson, Garba Shehu, said both appointments took effect from May 29, 2019. Meanwhile, many Nigerians, opposition parties, economists and foreign investors have expressed worries over the delay in President Buhari's appointment of ministers.
It appears with the latest statement by the Presidency, Buhari's current priority is his domestic staff.
The President, who has been accused of nepotistic tendencies, reeled out the names of 11 people mostly from the northern part of the country. 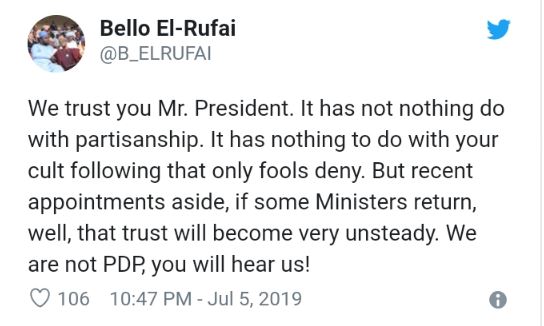