The moment a huge python killed and swallowed a crocodile has been captured in pictures. 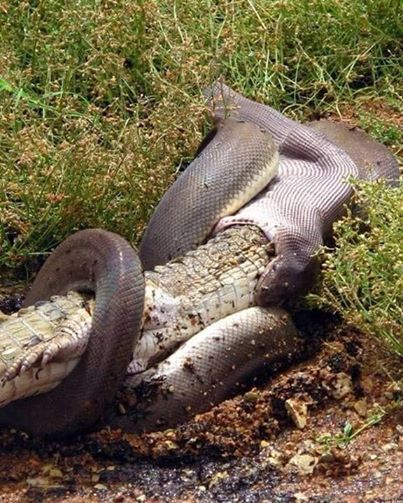 Python swallowing crocodile
Photos showing the moment an olive python (Liasis olivaceus) swallowed an Australian freshwater crocodile (Crocodylus johnstoni) have emerged.
The photos demonstrate that in the battle between pythons and crocodiles in the wild, the pythons are kings.
According to livescience.com, the photos come courtesy GG Wildlife Rescue Inc., a nonprofit in Australia, which shared them on its Facebook page on May 31. The images were taken near Mount Isa, Queensland, by kayaker Martin Muller.
We can not resist also sharing with you to ponder for the weekend about the pecking order in the wild.
Pythons are known for their dietary ambition. The large snakes have been found with the remains of everything — from deer larger than themselves and impalas to prickly porcupines — in their bellies. These snakes also happily eat one another, as witnessed in May in Western Australia. On very rare occasions, some python species will even attack and eat humans.
Pythons also have been known to go head-to-head with crocodiles and alligators. In an infamous case in 2005, a Burmese python in Florida’s Everglades National Park was found burst open and dead with an American alligator (Alligator mississippiensis) sticking out of its gut. Burmese pythons (Python bivittatus), which can grow as large as 18.8 feet (5.74 meters) long, are an invasive species in Florida.
The olive python, on the other hand, is native to Australia and is found only there. This species can grow to up to 13 feet (4 m) long. Clashes with Australia’s “freshies” (the local nickname for freshwater crocodiles) are common. In 2014, an olive python was video-recorded killing and eating a freshwater crocodile at Lake Moondarra, which is near Mount Isa. In that case, it took five hours for the snake to slowly stretch its jaws around the constricted croc.
Pythons are able to perform amazing feats of swallowing thanks to their elastic jaws. The snakes’ lower jawbones are divided into two parts, connected by an elastic ligament, which allows the bones to spread apart. When a python has a prey animal subdued, the snake first “walks” over it, a process called the pterygoid walk. Then, the snake uses its jaw to hang onto the prey while compressing its muscles and slithering around the subdued animal until the meal is engulfed.
Pythons also have a number of genetic adaptations that help them to digest huge meals all at once. Research published in 2013 in the journal Proceedings of the National Academy of Sciences found that Burmese pythons rapidly alter their metabolism after they eat, and even increase the size of their internal organs (including the intestines, pancreas, heart and kidneys) to handle the influx of calories. 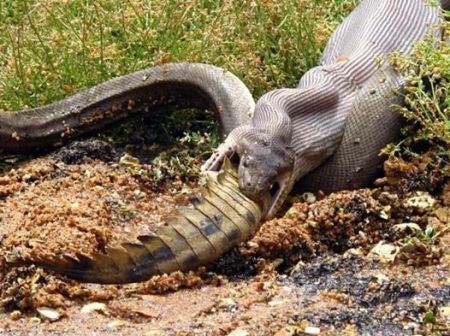