Members of the Senate had argued that such an arrangement would enable the lawmakers to know the specific questions to ask the nominees. 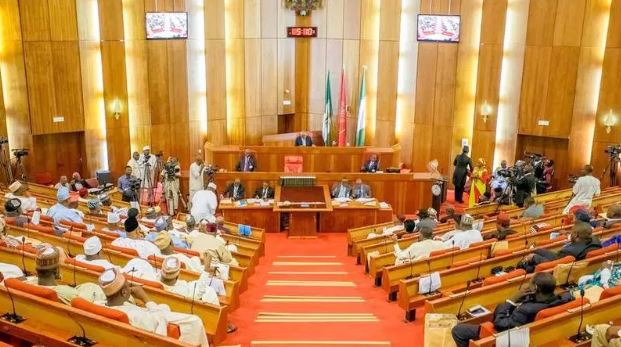 The Senate has described as unnecessary the resolution passed by the 8th Senate which mandated the President to attach portfolios to the ministerial nominees’ list.
The Eight Senate under the leadership of Senator Bukola Saraki had passed a resolution asking the President to indicate the portfolios that would be assigned to the ministerial nominees.
Members of the 8th Senate had argued that such an arrangement would enable the lawmakers to know the specific questions to ask the nominees.
The member representing Akwa Ibom North-East Senatorial District, Bassey Akpan, had received satisfactory nods from his colleagues when he reminded the leadership of the 9th Senate about the resolution passed by their immediate predecessors on the issue.
Akpan had argued that the best way to help the President put the right person in the right position was to know the specific ministry each nominee would handle when they appear for screening.
He maintained that such arrangement would enable the lawmakers to assess the competence of the nominees.
But speaking on behalf of the 9th Senate in an interview with a correspondent on Friday, the spokesperson, Senator Adedayo Adeyeye, said it was not mandatory for the President to attach portfolios to the ministerial nominees’ list.
He argued that Presidents of advanced countries like the USA which subscribed to such practice still reserved the right to swap portfolios of their nominees before and after their inauguration.
Adeyeye argued that the late Chief Obafemi Awolowo, a lawyer, performed well as minister of finance while the late Aminu Kano, a teacher, also did well as the minister of health.
He said, “It is not a constitutional prerequisite neither is it mandatory for the President to assign portfolios to the ministerial nominees.
“Also, Senate up till now has not made any law or any regulation that would insist on that.
“There is nothing, either in the Senate rules or in the Constitution that will compel the President to do that.”
Adeyeye admitted that attaching portfolios to ministerial nominees list would have assisted senators to ask specific questions but insisted that it was not necessary for the parliament to emphasise it.
He said, “Our major concern is to identify the leadership qualities in the nominees being presented to us for screening.’’
Top Stories