During the week, Jacobs celebrated his seventy-seventh birthday and his wife melted the hearts of many with the lovely message she sent to him on the day. 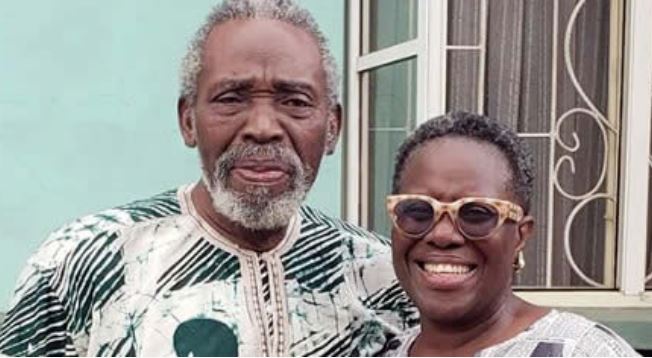 Olu Jacobs and Joke Silva
Widely regarded as the golden couple of Nigeria’s film industry, Joke Silva and Olu Jacobs have won the admiration of many with their union which has endured over the years. In an industry where marriages regularly crash at the drop of a hat, it is indeed commendable that the couple is still waxing stronger in love after 36 years.
During the week, Jacobs celebrated his seventy-seventh birthday and his wife melted the hearts of many with the lovely message she sent to him on the day.
Asked to identify the factors responsible for the success of their marriage, Silva told Sunday Scoop, “It’s not as if ours is better than anybody else; just that we are in the public eye. However, it is by God’s grace to have a very good friend in the person you marry. And we try our best, as humanly possible, to be honest with each other. This means that when one is upset with each other, one lets the other person know. It is majorly all about friendship; I really don’t know how to articulate it.”
The couple has played onscreen lovers in several films but one that resonates is the movie, The Royal Hibiscus Hotel, in which they couldn’t seem to get their hands off each other. Asked whether those characters bore any semblance to their real lives, Silva said, “I don’t know about being all over each other but we are very close.”
Silva also noted that the couple never mixed business with pleasure. She added, “Of course, there has to be a separation (between work and home). We don’t mix business with pleasure. There is a difference between our lives in movies and our lives at home. Work is fiction even though we try to pass real messages across. At home, we are faced with real life issues such as diesel in the generator, home helps, doctor’s appointments and other things.”
Sparing some advice for young entertainers, especially those who married within the industry, Silva said, “I find it very difficult to give people advice because we all have different situations. But something that always works is patience. And as much as possible, try to be honest with each other. However, it is honesty that is not cruel. You have to understand that there is cruel and wicked honesty, and loving honesty as well. It doesn’t mean you wouldn’t get angry, but you don’t have to cross the line of getting violent. Violence is not only physical; it can also be emotional. However, at the end of the day, the most important factor is God. I am happy that we have weathered our storms over the years in our 36 years of marriage. I am not sure I would have said the same thing I’m saying now 20 years ago. Perhaps, then, I could have asked his people to come and carry him and take him to wherever they wanted.”
Top Stories