The modus operandi of the suspects was to look for the rider of a new motorcycle and pretend as passengers, having armed themselves with powdered pepper. 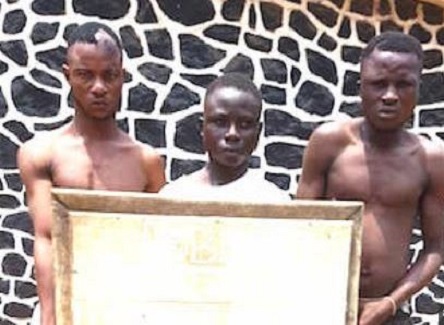 The suspects
Men of the Ogun State Police Command have arrested three suspected members of an armed robbery gang who allegedly specialised in snatching motorcycles after spraying pepper on their victims’ eyes.

The suspects were said to be operating in Aiyepe, Ososa and adjoining communities in the Odogboolu Local Government Area of the state.

The Police Public Relations Officer in the state, Abimbola Oyeyemi, said this in a statement in Abeokuta on Sunday.

Oyeyemi said the modus operandi of the suspects was to look for the rider of a new motorcycle and pretend as passengers, having armed themselves with powdered  pepper, screw driver and spanner.

The PPRO stated, “On getting to an isolated area, they will spray the pepper on the eyes of the motorcyclist, stab him with the screw driver to make it easy for them to overpower and dispossessed him of the motorcycle.

“Luck, however, ran out on them on Sunday when they robbed one Tanko Abdullah of his Bajaj motorcycle with number plate JBD 375 WZ after spraying pepper on his eyes.

“The alarm raised by the victim attracted the DPO, Odogbolu Division, CSP Saminu Akintunde, who was on a routine patrol with his men; the team raced to the scene and with the help of other commercial motorcyclists, they apprehended the trio of Ibru Ogbeba, Monday Wewe and Bisoye Odubote.

“Recovered from them were the snatched motorcycle, powdered pepper, screw driver and spanner.

“Another victim of the suspects’ operation, one Michael Sunday, whose Bajaj motorcycle was snatched on June 26, also identified them as those who snatched his own motorcycle.”

The PPRO said the state Commissioner of Police, Bashir Makama, had ordered the transfer of the suspects to the Special Anti-Robbery Squad for discreet investigation.

The CP, according to Oyeyemi, has warned that the state will no longer be conducive for criminals.
Top Stories