The Nigeria Labour Congress has said the Congress has not issued any strike notice over the implementation of the new national minimum wage. 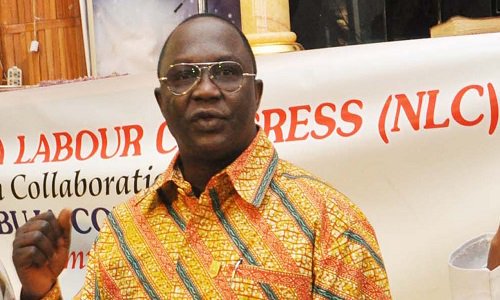 Comrade Ayuba Wabba
According to a report by The Nation, the President of the Nigeria Labour Congress (NLC), Comrade Ayuba Wabba has said that the Congress has not issued any strike notice over the implementation of the new national minimum wage by the government.

Wabba told The Nation in Abuja that discussion over the implementation of the minimum wage and the consequential adjustment was going on smoothly, pointing out that when the time comes for a strike ultimatum, Nigerians will be informed accordingly.

The NLC President also commended President Muhamadu Buhari for signing the Africa Continental Free Trade Agreement, saying organised Labour were initially against Nigeria signing the agreement because there was no consultation.

He disclosed that only Nigeria and South Africa carried out extensive consultation on the agreement, adding that the observations of organised labour have been reflected in the agreement, part of which is that goods to benefit from the trade agreement must be produced in Africa.
He said “our own case is going on well. We met with our unions yesterday. The difference right now is about the consequential increase and we hope that through a normal process of dialogue, we will be able to sought that out.

On the strike alert already issued, he said ” no, we don’t work with that, please. NLC, as an organised body, I am not sure we have given any notice to that effect. If we reach a point of issuing threats, we will do that without hesitation.

“But I have seen much information on social media. We are a credible organisation and we should be able to speak for ourselves.

” If we get to that point, we will be able to inform you. But for now, the process is going on and we have been able to expand the scope of dialogue to include NLC/TUC and only limited to the unions in the public sector”.

Speaking on the benefit of the Africa Continental Free Trade Agreement recently signed by President Muhammadu Buhari, Wabba said organised labour was initially against Nigeria signing the agreement because there was no dialogue among the social partners in how it will benefit the country especially workers.

He said “We were against it because there was no consultation and nobody even knew the content. I can say with nostalgia that it is only Nigeria and South Africa that did the type of consultation we did. Through our engagement process, there was dialogue, there was consultation with key stakeholders in the economy and we were able to identify way to improve and key into the Africa Continental free Trade Agreement and to have a comparative advantage.

“How do we also protect our local market? With the agreement, there will be a common tariff, some of the tariff will drop, the income accruing to government in terms of revenue will also drop. How we key into it is to produce. Then, how do we create an enabling environment for our industries to produce and be able to compete with other countries because some of them will be targeting our population.

“With our population of about 200 million, you will be at the receiving end. Goods will be produced by your neighbour and flood your country because they have favourable employment policies, key investment opportunities like power and critical infrastructure. We said yes, it is a good policy and we cannot be the odd one out.

” Having understood what we need to do and having taken steps to do them, we thought that it was right for us to sign and with the consultations that took place, it was clear that we were all on the same page and we highlighted all that we need to do. Critically, we said that our jobs must be protected. Otherwise, our jobs will be taken away and the unemployment situation will continue.

“What we, organised labour are impressed with is actually the consultation process that went into the process. If policies are about the people, then they should be consulted and that is the hallmark of it.

“It was because we shouted that people started asking questions about the content of the agreement. So, how do we sign what we are not aware of? We don’t just join the bandwagon. Africa is about Nigeria. Some of those countries that signed earlier are less than local government in Nigeria.

“If Nigeria has not signed the agreement, it means Africa has not signed it because we are the largest economy in Africa and also the key market in Africa. What we are impressed with and have canvassed that all other policies should be tailored along is the consultations.

“We have also insisted that it should be made in Africa goods and it should be strictly trade among African countries and that you import goods from other parts of the world, dump them in one African country and begin to flood our market with the goods. That is not part of the agreement because it is going to affect our economy and we will be at the receiving end”
Top Stories