Police officers caused some drama recently when they invaded the office of the National Business and Technical Examinations Board in Abuja. 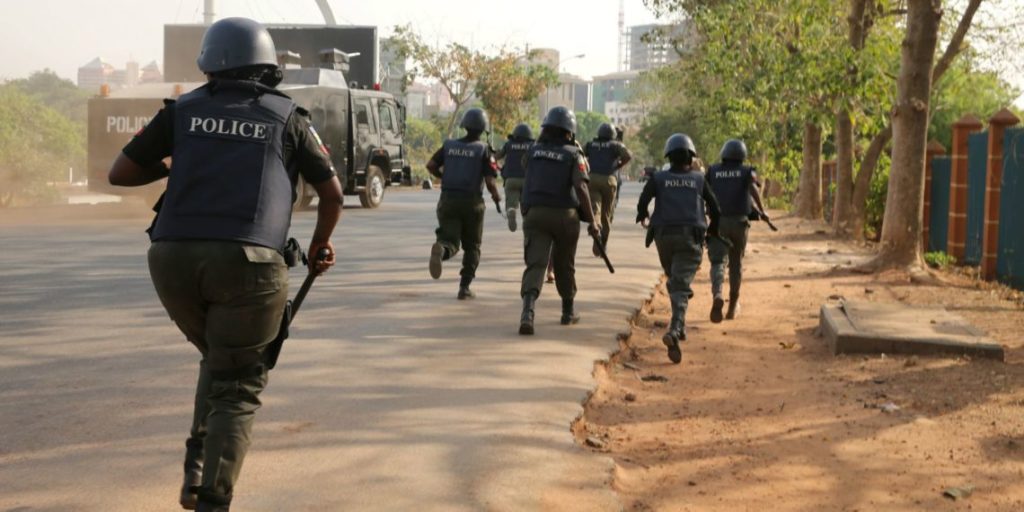 File photo
According to Punch Metro, the workers of the National Business and Technical Examinations Board in Abuja on Tuesday protested against  the alleged  invasion of  its  zonal office in Wuse,  sealing the office after removing office and examination materials from the place.

The workers, who claimed the police had  sealed  the office since Sunday, carried various placards, calling for the intervention of the Federal Government in  the matter.

It was learnt that the police were   from  to the Inspector-General of Police Special Tactical Task Force Squad.

They were said to have acted on the instructions  of “faceless individuals who are laying claim to the ownership of NABTEB premises”.

Punch Metro was told that the officers  also arrested  two security men on duty at the office.

One of the protesters and Chairman of the Non-Academic Staff Union, Paul Ohuimumwen, said the  action would affect the conduct of NABTEB examination as “significant materials were carted by the policemen”.

He said, “The office has been here since 1998. In 2013, some people came, wrote  to us that the building had been sold and  that we should vacate the premises. But the matter is in court. Just on Sunday, some policemen broke into the  office and removed the air conditioners.

“As we speak, candidates cannot access this office for enrolment. The policemen cleaned the NABTEB logo from the walls. There are some individuals trying to take over a Federal Government property.

“The policemen look like Special Anti-Robbery Squad officers. But this is not a private property. This is a Federal Government’s establishment. You can imagine the kind of injustice we face in this country, where an individual believes they are  more powerful than the government. We are asking the National Assembly and the Federal Government to wade into this matter.”

NABTEB Principal Legal Officer, Shelley Madojemu, said, “The building was given to NABTEB in 1998. We have the Certificate of Occupancy. In 2013, we got a letter from a faceless person saying that they had  acquired the property. But we all know that this is a Federal Government establishment.

“The police came on Sunday. The director of this zonal office was arrested and was only released days ago. This is an examination body and examination activities have been grounded since Monday. We are supposed to be registering candidates for admission to tertiary institutions. That has been halted. We are calling on the Federal Government not to allow such private invasion.”

He said, “This is news to me. Honestly, I have not heard anything about it. What I am going to do is to initiate investigations into it  to know exactly what has happened.”
Top Stories