A young teenage boy protesting with his mother has lost his two eyes after being shot by police officers. 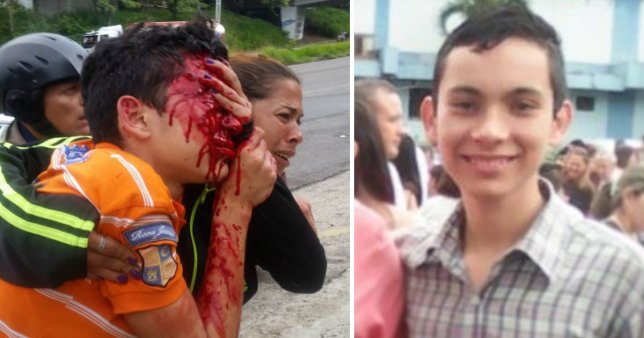 Rufo Chacon has lost his two eyes
A teenager shot with 52 rubber pellets by police has had to have his eyes removed. Rufo Chacon, 16, was protesting with his mother and brother over a shortage of cooking gas in his town in Venezuela, according to Metro UK.
He was injured when the authorities shot into a crowd of demonstrators and images of his bloodied face shocked the world. Rufo was rushed to hospital but medics were forced to remove both his eyeballs after they were catastrophically wounded.
The teenager told CNN that he desperately wants his vision back.
He said that he was starting to forget what colours look like, adding: ‘I want to have my sight back. ‘I have all sorts of feelings, I would like to cry but I can no more.
I cried enough in the hospital.’ Rufo spent four days in hospital but doctors discharged him, fearing that he would pick up an infection if he stayed any longer.
Medics removed what remained of his eyeballs but have had to leave some pellet fragments inside his face and head as they are too deeply embedded. 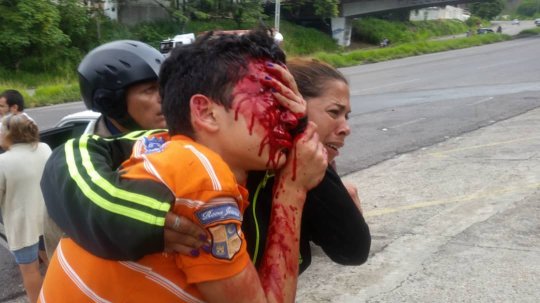 Benefactors in Mexico, Spain and the US have rushed forward to pay for his medical treatment while a clinic in Colombia has offered to replace his eyelids for free.
Rufo was with his mother Adriana and brother Adrian, 14, to protest against a lack of cooking gas in the northern town of Tariba.
The family have been without gas since April amid economic collapse in the country and plummeting output by gas refineries. Adrian and another child suffered head injuries after being beaten with batons at the demonstration.
In a rare move, Venezuelan authorities have condemned police actions in suppressing the protest and arrested two officers. The pair have been charged with attempted murder, improper use of weapons and cruel treatment and are currently awaiting trial.
The violence was also denounced by opposition leader Juan Guaido, who is recognised as Venezuela’s legitimate president by most western nations.
The politician added: ‘We will not get used to it, we will not stop calling them murderers … nor will we get used to the sadistic act against the eyes of Rufo Chacón who also did not get used to living without gas in a country that had plenty.’
Top Stories