Unbelievable! Meet The Man Who Has Not Cut Or Washed His Hair In 40 Years (Video)


The story has been told of the man who has not washed or even cut his hair for the past 40 years. 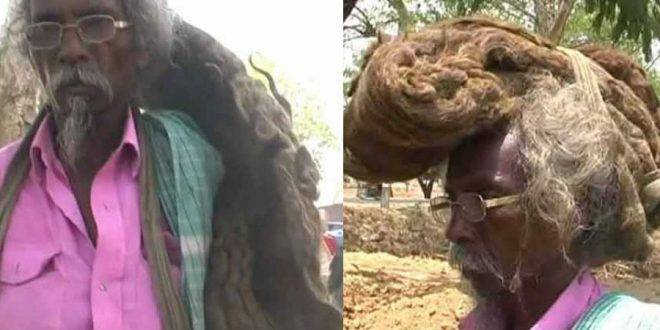 Sakal Dev Tuddu
A 63-year-old man in India who hasn’t cut or washed his hair in over 40 years has to keep his tangled 6-foot-long locks wrapped in a head cloth just to walk around without stepping on them.

Sakal Dev Tuddu, a resident of Mandada village, in Eastern India’s Bihar state, claims he has been growing his hair long since he was 22. For some reason, he didn’t cut his hair for a whole year, and when he woke up one day he noticed his locks had become tangled into a ‘jatta’ (dreadlock).
He considered it a blessing from the Hindu god Shiva, so from that day on he never cut or washed his hair again. Today, his impressive jatta measures around 6 feet and reaches all the way to the ground and trails behind him. To keep his hair from becoming even dirtier, Sakal keeps it wrapped in a white cloth on top of his head whenever he goes out.
Ever since he started letting his hair grow, Sakal has become known as ‘Mahatma Ji’ among the people of Mandada, as a sign of deep respect. He is believed to have healing powers, and people come to him from all over India to try his home-made herbal remedies.
Sakal isn’t the first Indian man to go viral for his extremely long hair. Three years ago we wrote about Savjibhai Rathwa, a Gujarat man whose dreadlock measured a whopping 19 meters.
****
Oddity Centrel
Top Stories

Unbelievable! Husband Discovers That His New Wife Is A Man Two Days After Their Wedding
Recent Stories