The project is powered by the Turkana corridor wind, a low level jet stream originating from the Indian Ocean and blows all year round, according to a government statement. 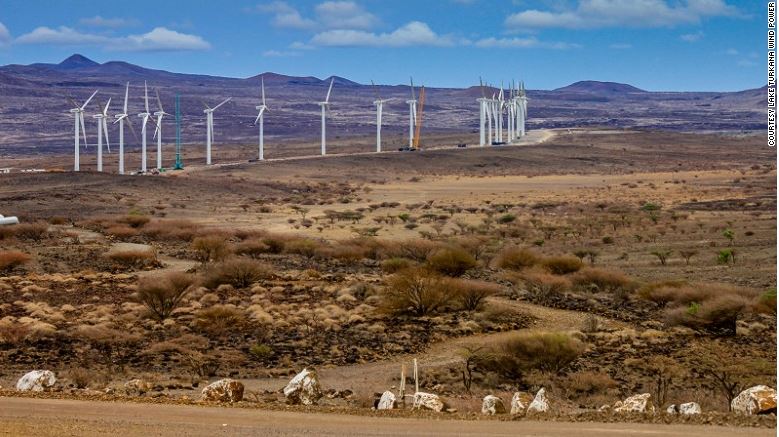 File Photo
Kenya has launched Africa's largest wind power farm in a bid to boost electricity generating capacity and to meet the country's ambitious goal of 100% green energy by 2020.
The farm, known as the Lake Turkana Wind Power (LTWP) will generate around 310 megawatts of power to the national grid and will increase the country's electricity supply by 13%, President Uhuru Kenyatta said at the launch of the project on Friday.
"Today, we again raised the bar for the continent as we unveil Africa's single largest wind farm," Kenyatta said.
"Kenya is without doubt on course to be a global leader in renewable energy."
The project is powered by the Turkana corridor wind, a low level jet stream originating from the Indian Ocean and blows all year round, according to a government statement.
An international consortium of lenders and producers, which includes the African Development Bank, came together to install the 365 wind turbines, which cost around $700m, the largest private investment in Kenya's history, President Kenyatta said.
The 52-meter blade span windmills will take advantage of high winds in the remote area.
In the past years, Kenya has made progress in investing in clean sources of energy. According to the Renewables 2018 Global Status Report, the country is 9th in the world for its geothermal power generating capacity of up to 700 megawatts.
Around 70% of Kenya's national electricity comes from renewable sources like hydro power and geothermal.
State-owned power company KenGen produces approximately 80% of electricity consumed in Kenya, and of that, 65% comes from hydro-power sources, which it sells to Kenya Power, the country's main electricity transmission company, Kenya's LTWP is not the only existing wind power project on the continent. Africa has fully operational wind farms in Morocco, Ethiopia, and South Africa providing sustainable energy.
In South Africa, wind energy is already boosting electricity. With five wind farms in place, the country has added a collective 645.71 MW to the national grid.
And in Ethiopia, two of its wind farms account for 324 MW of the country's total electricity output of 4180 MW.
While these projects will help build energy supply on the continent, the International Energy Agency has said sub-Saharan Africa needs to invest $300 billion in order to achieve universal electricity access by 2030.
Top Stories