Talented winger, Willian will now wear the No.10 shirt for Frank Lampard's side for the 2019-20 season. 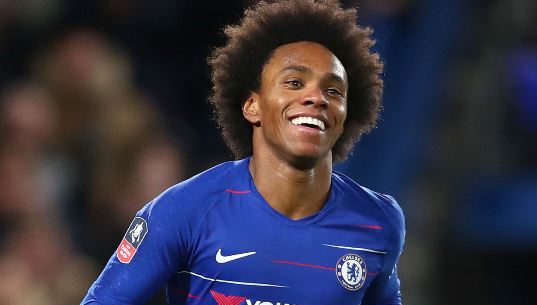 Willian
Brazil international, Willian has been given a new jersey number at Chelsea.
Willian will now wear the No.10 shirt for Frank Lampard’s side for the 2019-20 season.
The 30-year-old switched from his previous number, 22, which he had worn since joining the club from Anzhi Makhachkala in 2013, ahead of the new campaign.
According to 101greatgoals, Willian confirmed this in an interview with Brazilian TV show, Desimpediodos on Sunday.
He said: “I was offered the number 10 jersey ahead of next season, and I will take it.”
The number No.10 shirt was last worn by Eden Hazard who left the club for Real Madrid earlier this summer.
Willian will hope to lead Chelsea to victory when they take on Barcelona on Tuesday in a pre-season friendly game.
Top Stories