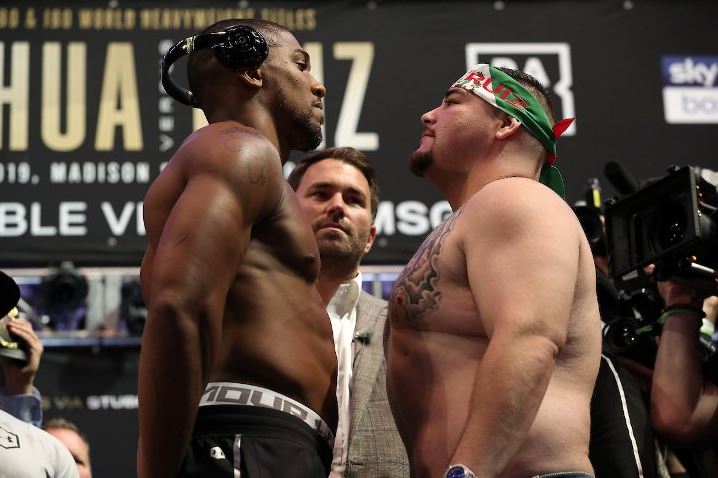 Anthony Joshua and Andy Ruiz
Eddie Hearn, promoter for Anthony Joshua, has made it clear that his boxer will be the one who decides where the Andy Ruiz rematch takes place.
There has been a lot of talk, mainly from Ruiz, stating that he's the A-side of the equation and holds the keys to the rematch location.
Ruiz shocked the world last month, Ruiz dropped Joshua four times to secure a seventh round stoppage and captured the IBF, IBO, WBA, WBO heavyweight titles.
Here is a rematch clause, which Joshua exercised.
Despite Ruiz's numerous statements in the media with respect to money and making the fight in Mexico, most promoters will establish the rematch location, and the financial terms, in the initial bout agreement.
So when Ruiz signed on for the first bout, the rematch terms were already outlined in that contract.
Ruiz took the fight as a late replacement for Jarrell Miller, who was pulled from the fight after failing three drug tests.
“Andy Ruiz Jr is an honorable stand up guy. He knows what he signed and it wasn’t unfair what he signed but he has contractual obligations that he has to meet now. Andy Ruiz was chosen from a group of people because we believed he would be the best most competitive fight for Anthony Joshua – we were right," Hearn told IFL TV.
“And then, if he was to win that fight, as set out in the contract there were a number of terms that he would have to adhere to. It’s very standard. It’s not, ‘oh that was out of order, he is the A-side now’.
"No, this was what was agreed by both parties. Negotiated and agreed. Joshua will be the one who ultimately decides where that fight takes place.”
In other news,  heavyweight contender Andy Ruiz is still negotiating the details of his rematch with Anthony Joshua.
The rematch is being targeted for a date in December.
But Ruiz is motivated to bring the bout back to the United States. Ruiz would like to topple Joshua and then move forward with a fight against WBC heavyweight champion Deontay Wilder.
"We’re still in negotiations, they [are] trying to make us go over there," Ruiz said on Fox Sports.
"We are trying to get it back here in New York. I’d be more comfortable here. Me and [Wilder] we’re in the same team, I just got to beat Anthony Joshua and then we’ll move onto the next."
Top Stories

WTO: Nigerians Lambast US For Opposing Okonjo-Iweala As Consensus Candidate