Nigerian Boxer, Efe Ajagba Opens Up On Recent Victory In The U.S 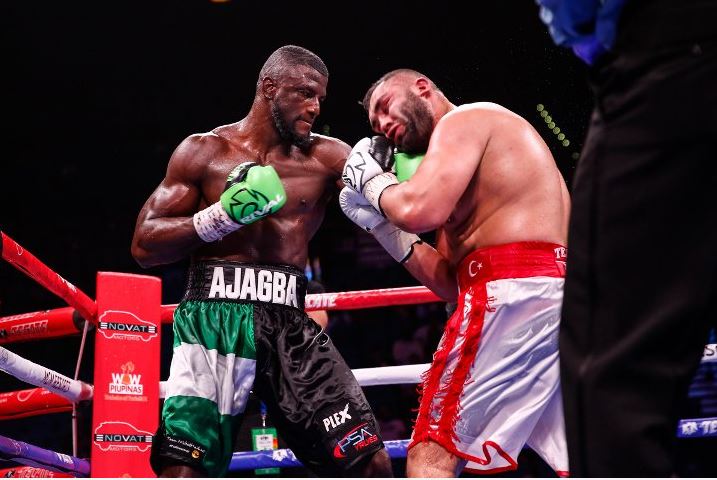 Efe Ajagba and Ali Eren Demirezen
This past Saturday night at the MGM Grand in Las Vegas, Efe Ajagba (11-0, 9 KOs) scored a unanimous decision over Ali Eren Demirezen (11-1, 10 KOs) in a 10-round battle of undefeated heavyweights. It was the first time that two unbeaten fighters from the 2016 Olympics faced off as pros.
Ajagba used his jab and height effectively throughout the fight, landing 10 of 45 jabs per round, doubling the heavyweight average. However, an elbow injury and the accurate punching of Demirezen forced Ajagba to go the distance for the first time as a pro.
"This was the first fighter to take me the distance," said Ajagba. "He was strong and could take my punches. My trainer just told me to keep using my jab and stay in the middle of the ring.
"I hurt my elbow early on, so I couldn't shoot my right hand like I wanted. But I won't use that as an excuse. As a tall man I had to use the jab and if it went the distance, that was my best way to win."
Demirezen thought the scorecards should have been closer and believed that his performance should have garnered him more than the decision loss. Demirezen was actually the more accurate puncher, landing 26% of his punches to 22% from Ajagba.
"I don't agree with the scores, especially 99-91" said Demirezen. "It was much closer. I feel that at minimum, it was a draw. I knew I had to knock him out and that a knockout might be easier than winning by points. I thought it was a good performance but I can do better. I'd like to fight in the U.S. again."
Ajagba's activity from start to finish was impressive, as he threw 877 total punches, landing 191. While Demirezen was not far behind with 149 punches landed, he only out landed Ajagba in three rounds.
After 10 rounds of action all three judges scored the fight in favor of Ajagba, by scores of 99-91 twice and 97-93.
Top Stories