As many as three Nigerians who were involved in a romance scam have been nabbed in Thailand. 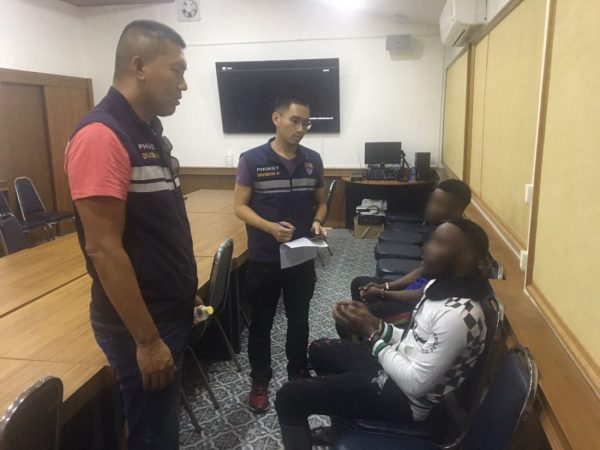 The first two alleged Nigerian scammers arrested in Thailand
Thai police have arrested a 38 year old Nigerian for alleged ‘romance scam’, about a month after two other Nigerians were arrested for the same offence, PM News reports.

The latest Nigerian suspect, not yet identified, was arrested in Bangkok for allegedly operating bank accounts and arranging money transactions. He was operating out of Phuket, south of Bangkok.

The suspect is now being returned to Phuket, where an arrest warrant was issued on July 9 charging the man with conspiracy to commit fraud.

Immigration Police Bureau chief Pol Lt-General Sompong Chingdoung reports that police made the arrest on July 19 at a condominium in Bang Na district in Bangkok. During the raid they also seized 14 items of evidence, including several bankbooks, ATM cards and money transaction slips, as well as the suspect’s mobile phone.

The romance scam was perpetrated by a gang claiming to be white businessmen, who feigned romantic intentions towards their Thai victims via social media. After earning their trust and affection online, the gang then offer the women gifts but tell them to transfer funds into their bank accounts to pay for the import duties to release the non-existing expensive gifts.

One victim in Phuket allegedly lost 897,400 baht, about $29,000 to the scam. Police are now hunting for the accomplices of the 38 year old suspect.

Sompong said that investigators found that the suspect was using bank accounts that had been opened by Thai nationals in exchange for payments. The gang had opened a front company to transfer the money to accomplices overseas.

In June, Thai police also arrested two Nigerians in connection with romance scams. The Nigerians were arrested in Patong, according to a Thai newspaper, phuketnews.com.